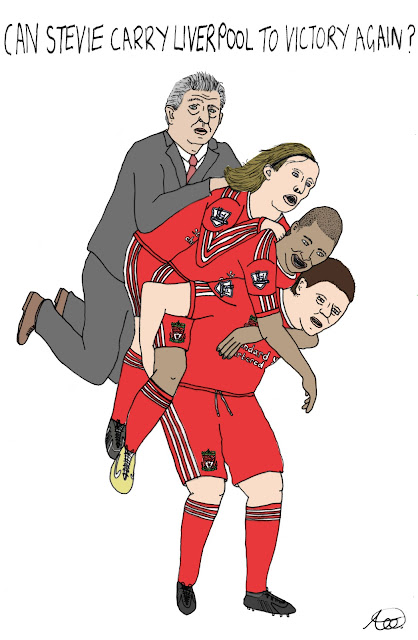 As we near Remembrance Day I find myself thinking of the famous Churchill quote ‘Never was so much owed by so many to so few’.

Or rather ‘Never was so much owed by so many to one man, Steven Gerrard.

The number of times he has saved Liverpool’s skin is unbelievable.

I struggle to think of another player that has rescued his team time and again the way Gerrard has. The word incredible doesn’t do him justice.

Gerrard was inspirational against Napoli on Thursday when came on at half-time with his team trailing 1-0 and scored a hat-trick to keep his side top of Group K and on the brink of a last-32 place in the Europa League.

Following the game Hodgson was first to admit “We owe a big debt of gratitude to him”.

Chelsea’s own goal match winning talisman Didier Drogba has admitted he is wary of facing resurgent Liverpool side on Sunday, who are showing signs of improvement following a disappointing start to the season.

“There is never a good time to go to Anfield because they are a very strong team,” said Drogba. “They will try to use this game to start their season, so we have to be ready.

“We are seeing a different Liverpool than the one from earlier in the season. They have won their last two matches and their confidence is getting higher.

“We have to be careful. It’s true that we shouldn’t fear any team but we’re going to have some difficult moments. Since I’ve been here, Chelsea v Liverpool has been special and it’s always a difficult game.

“We’re going there to win but it’s not going to be easy.”

Confidence in the Liverpool squad should be high after winning three games in a row and no doubt Hodgson will be praying for another heroic Gerrard performance to help his team get a result against the Champions.