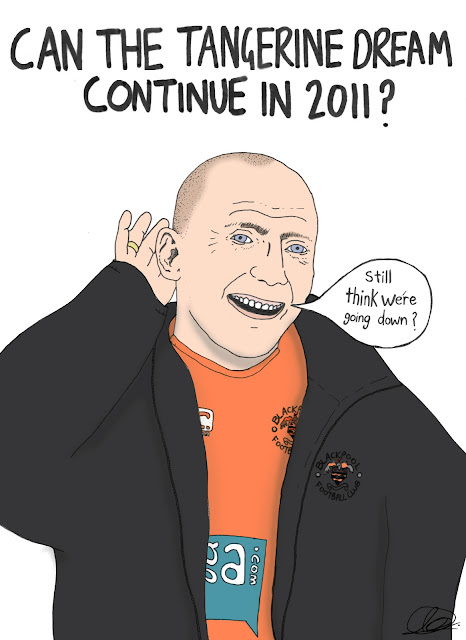 Many were quick to write off Blackpool’s chances of survival in their first appearance in English footballs top flight for 39 years.

Contrary to everyone’s expectations the Tangerines have gone a long way to dispelling the idea they are relegation fodder and they sit at eighth in the Premier League with a game in hand as we head into the New Year.

Much of the credit has to go to manager Ian Holloway who has crafted a successful team from limited means.

Speaking about the driving force that inspires his work as Blackpool manager Holloway said ‘I am now doing it for total enjoyment, to try to help my lads play better than they have ever played in their lives and encourage them.’

Plaudits for the eccentric Blackpool boss have come from Harry Redknapp who has stated his belief that Holloway has performed a ‘miracle’ by turning the Seasiders into a legitimate force to be reckoned with in the Premiership.

‘Mourinho couldn’t have done as well at Blackpool as Ian Holloway’, said Redknapp. ‘No one could have done a better job. How he’s scraped a team together, with free transfers, loans, people that have been here, there and everywhere, and just got them to play the way they’ve played has been fantastic. It’s a fairy story.’

We have seen recent examples how quickly a fairly tale start in the Premiership can turn sour, after Hull City were swiftly brought back to earth following an impressive start to the 2008-09 season.

With 25 points from 17 games Blackpool are just 6 points off the 31 points needed to survive in the Premiership this season and look in good stead to stay up.

Ahead of Blackpool’s visit to Eastlands this Saturday Manchester City assistant manager Brain Kidd has stated his belief that Ian Holloway should be the manager of the season if he keeps his side in the Premier League this season, which is a sentiment I am inclined to agree with!