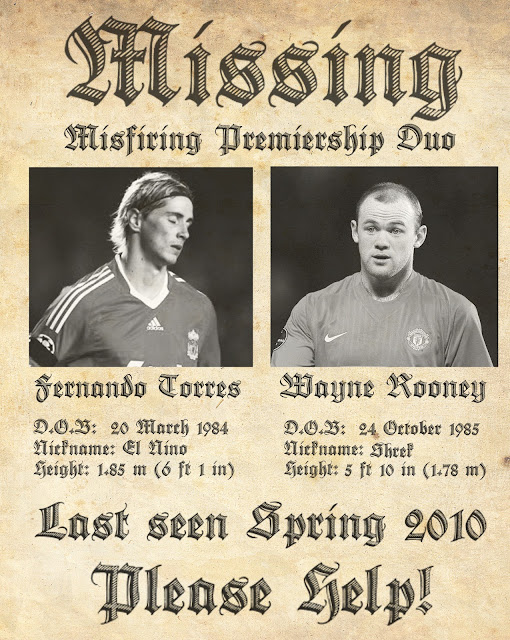 Fernando Torres and Wayne Rooney’s goal scoring form has been missing for quite some time now.

But with just one goal each after six games, we are still waiting for them to rediscover the goal scoring form that we know they are capable of.

They were expected to light up the World Cup this summer, but both players had subdued performances during the World Cup and the return of the Premiership has not brought about a return to form.

Excuses have been a plenty as for reasons why, including the effects of close media scrutiny on Rooney’s private life and failure to fully recover from injuries.

There have been suggestions coming from a number of different sources citing that a switch of club is needed for the players to escape their current predicaments.

Fergie has admitted that he thinks that the high level of media attention Rooney has received of late is having a detrimental effect on his psychological state of mind and it is showing on the pitch.

Interest from Spanish giants Real Madrid and Barcelona have been cited as potential escape routes for Rooney, should he deem it necessary to escape the spotlight of the British media.

Barcelona defender Gerard Pique has also said that a move away from Liverpool is what is needed for Torres if he wants the successes of his club football team to match that of his international side.

Pique lays blame on the current Liverpool squad as to part of the reason why Torres’ goal scoring has taken a dip stating rather bluntly ‘It’s really embarrassing for Nando to play in a team of that quality’. Harsh.

Switching club would be a drastic measure, but watching these two play this season there has been little sign of the players we know from last season. The search continues…