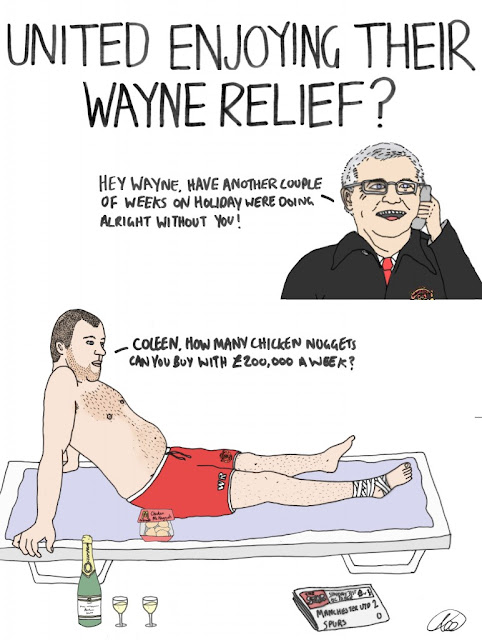 According to Sir Alex Ferguson it will be five weeks before Wayne Rooney recovers from the reoccurring ‘ankle injury’ that has plagued him so far this season.

Speaking to the Sunday Express he said “He will have to pick up his fitness again. I would think five weeks should be about right.”

However, we have learned to take some of Fergie’s comments with a pinch of salt following the revelation he has used fake injuries in the past as a convenient way of dropping out of form players whilst sparing red faces.

This admission that Fergie is not adverse to concealing the truth has led some to speculate that Rooney’s ankle injury is just a smokescreen and that he will still be offloaded in January for a higher price following the signing of his new contract.

Whilst this conspiracy theory would give tin-foil hat wearing David Icke a run for his money, photos of Rooney frolicking by the pool on holiday with no ankle support have added fuel to the fire.

Whether or not there is any substance to this rumour, Rooney’s absence from the United squad has served as a blessing in disguise as it has allowed other players to shine.

Javier Hernadez has established an effective partnership with Dimitar Berbatov and Luis Nani is developing into one of the finest attackers attacking midfielders around.

Perhaps Fergie will be encouraging Wayne to spend some of his rapidly increasing fortune on an extended holiday until the reopening of the transfer window.