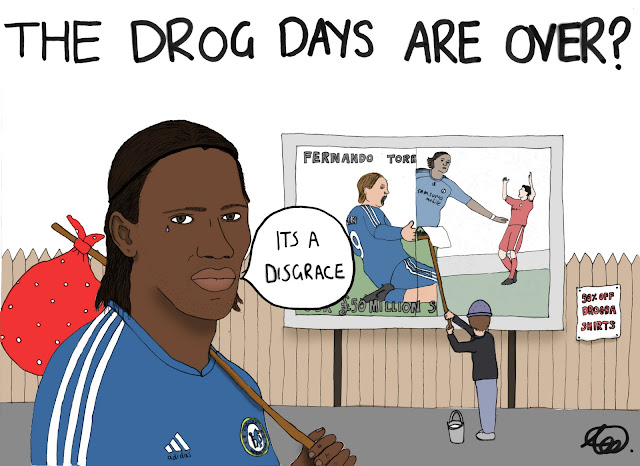 The arrival of Fernando Torres at Stamford Bridge has signalled the beginning of a new era in Chelsea’s attack, which has raised questions about Didier Drogba’s future at the club.

The Ivory Coast international has been at the centre of attention at Chelsea since his £24million move from Marseilles in 2004, thanks to his impressive record for the club of 141 goals from 295 appearances.

Drogba enjoyed his best campaign to date for Chelsea last season scoring 37 goals from 44 games as the west London side claimed the domestic Double, but he has struggled to retain the same goal scoring form this season.

The striker has been far from prolific this campaign with his record currently standing at just 10 goals in 31 appearances in all competitions and he has been pushed down the Blues’ pecking order since the signing of Fernando Torres.

The former Marseille ace turns 33 next month and is in the final eighteen months of his contract, which has led to speculation as to his departure in the summer.

There has been talk of a summer clear-out at Chelsea and suggestions that they might look to cash-in on Drogba as they look to build the team around new £50million signing Fernando Torres.

Marseille have already announced their intention of trying to re-sign Drogba, but he has insised that he is not even thinking about his future and is focused on ending the campaign well with the Blues.

‘I could not comment at the moment on speculation,’ Drogba said. ‘I have a contract with Chelsea until June 2012. ‘

‘I just want to finish the season strongly, I am not thinking about my future contract at the moment I just want to put Chelsea on a good run.’

Are Drogba’s days numbered at Chelsea?