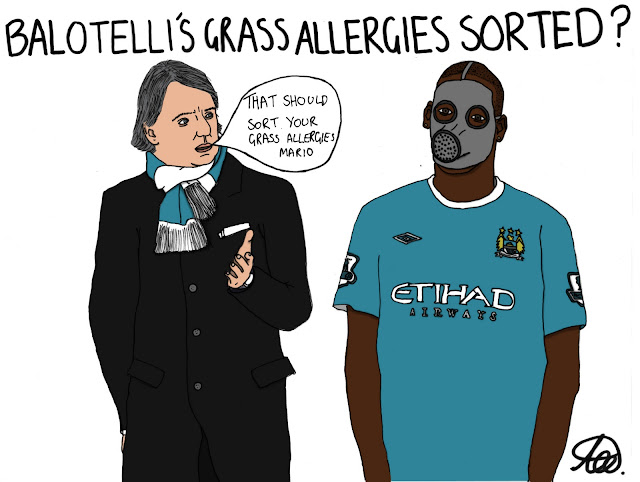 Roberto Mancini is hopeful that Mario Balotelli can feature in Manchester City’s game against Reading today which could see them reach the FA cup semi finals for the first time in 30 years.

Balotelli was unable to complete the Blues’ 2-0 Europa League first leg defeat against Dynamo Kiev last Thursday after suffering an allergic reaction to the pitch.

The young striker was late out for the start of the second half and had to come off 12 minutes later due to a swelling to his face.

It has been reported that he is allergic to certain types of grass, though Kiev have insisted they have a ‘normal pitch with standard grass’.

Balotelli has been assessed by the clubs doctors and returned to training on Friday, but it has not yet been confirmed if he will play in todays game.

Mancini has emphasised the importance of beating Reading today in a week which could make or break his sides chances of winning a trophy this season.

‘It’s a big week coming up in all three competitions,’ he said. ‘The Europa League is going to be hard for us but we still have a chance. The next few days will be important.’

‘The FA Cup offers us a big chance. We know how long it’s been since the last semi-final so this would be good for us, good for the club and the fans.’