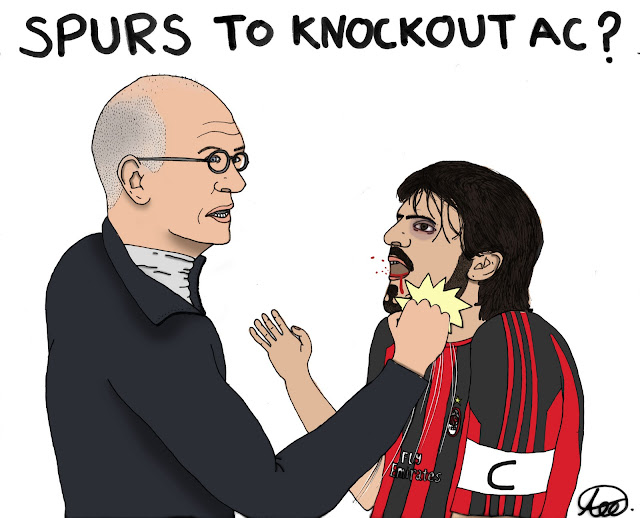 Gennaro Gattuso has opted not to travel with AC Milan for the return leg of their Champions League last 16 clash with Tottenham to avoid the no doubt unfriendly reception he would receive at White Hart Lane.
The 33-year-old midfielder was involved in an angry confrontation with Tottenham coach Joe Jordan at the end of the first leg at the San Siro that has resulted in him being given a four-match ban by UEFA.
Speaking on Italian radio he said ‘I would like to go to White Hart Lane for the second leg but I have been advised not to. I have been told there will be 47,000 people there just waiting to give me a slap, so I will stay in Milan.’
As well as Gattuso’s suspension Milan have suffered injuries to Andrea Pirlo and Massimo Ambrosini which means the Italians will be without their three key midfielders for tomorrows tie, whereas Tottenham’s leading men are returning to fitness.
Both Rafael van der Vaart and Gareth Bale took part in Tottenham’s training session this morning and stand a good chance of featuring in the action.
Tottenham have the upper hand thanks to their 1-0 victory in the first leg and are bookies favourites to progress to the next round, but Spurs midfielder Luca Modric has warned they must be wary of Milan.
‘We have a big advantage, but this is far from over and we can’t underestimate Milan and think it’s finished,’ Modric said.
‘They are a great side and we need to stay focused and prepare like we did in Milan. We have showed how good we are and that we can handle the big teams, but beating them was something special.’

Speaking about Spurs’ form in the Europe he added ‘One of the reasons why we are playing so good in the Champions League is because we are so excited to play here and we want to enjoy it while it’s going good. We have great belief and if we continue to play like that we can achieve a lot.’

Can Spurs knock out Milan?