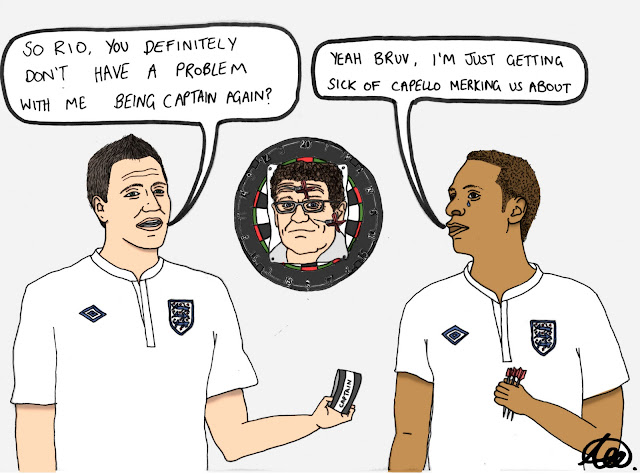 Fabio Capello revealed this afternoon that he still hasn’t spoken to Rio Ferdinand after having reinstated John Terry as England captain.

The England boss stripped Terry of his England captaincy 13 months ago following allegations over his private life, but this week made a controversial U-turn on the decision.

There have been accusations that Capello has shown a lack of respect for Ferdinand by failing to contact him after axing him as captain.

Speaking in today’s press conference Capello admitted he had made mistakes over the captaincy issue, but handed blame to Ferdinand for the absence of communication between the two.

‘I tried to meet him when Manchester United played against Marseille but he told me no,’ said Capello. ‘It didn’t happen, he didn’t come. I was in the directors’ box. You will have to ask him.’

‘I can understand why he was disappointed but I needed to make a decision. I prefer to speak personally, not on the phone. I’ll be happy when I meet him in the future.’

Capello has a history of blunders that have exposed his lack of communication with his England players, including selecting Paul Robinson and Wes Brown for a friendly against Hungary when they had both withdrawn from the game and retired from international football.

He also failed to speak with David Beckham before revealing in a television interview that he would not be picked again to play in another competitive international for England.