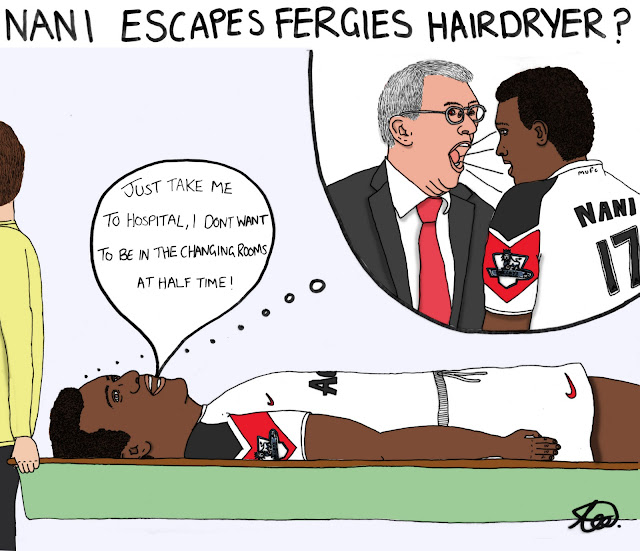 Luis Nani has produced the most Premiership goal assists so far this season, but he won’t be too proud of his latest effort.

The United midfielder gifted Liverpool their second goal of the afternoon yesterday when he headed Luis Suarez’s cross straight into the path of Dirk Kuyt.

However, he managed to escape an inevitable half time blast of Fergie’s hairdryer treatment as a result of a reckless challenge by Jamie Carragher which led to him being stretchered off injured before the break.

The Portuguese midfielder received a horrific gash in his leg that has been said cut to the bone and is expected to keep him out of action for a lengthy period of time.

The injury has been assessed at Carrington today, but as of yet no timescale on the winger’s absence has been given.

United fans will be worried about a prolonged absence for Nani as he has been one of their best players this season and will be important to the success of their season as they approach ‘squeaky bum time’.

The 3-1 loss against Liverpool was United’s second in a matter of days following the 2-1 defeat at Chelsea last Tuesday and has blown the title race wide open.

Ferguson’s side remain top of the table, but their recent slip ups have meant that second-placed Arsenal are now only three points behind with a game in hand.

The return to fitness of fellow winger Antonio Valencia softens the blow of losing Nani for United, who recently returned to full training.