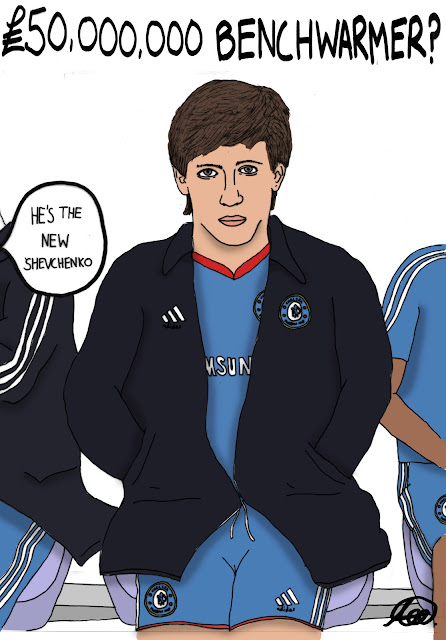 Chelsea’s 2-0 win against Manchester City yesterday marked Fernando Torres’s seventh appearance without a goal since his £50 million switch to the West London club.

Roman Abramovich shook his head with frustration when his star signing was subbed off with twenty minutes remaining and the game tied at 0-0, but was celebrating nine minutes later when David Luiz put the Blues ahead.

Luiz’s arrival at Chelsea was overshadowed by Torres’s record breaking transfer, but the Brazilian defender has made the bigger impact with two goals in five games and some excellent defensive displays.

None of Chelsea’s strikers are in prolific form at the moment and goals from defenders and midfielders have been responsible for the recent run of wins which have seen Chelsea leapfrog Manchester City into third place.

Chelsea boss Carlo Ancelotti has emphasised the need for patience with Torres and the rest of his misfiring strikers.

‘He has to keep going,’ said Ancelotti. ‘I don’t ask him to score, I ask him to move well, to have good movement. We have to be patient, he has to be patient and then the moment will arrive.’

‘Hopefully Anelka, Drogba and Kalou also will start to score. The most important thing is the team has good spirit and the strikers are trying hard.’