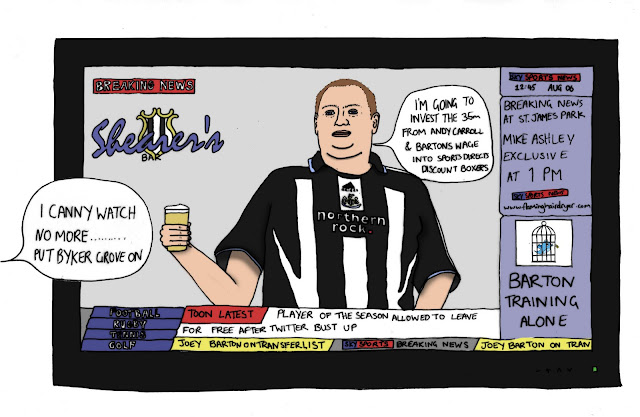 Newcastle United fans will have to witness yet more of their best players from last season leave the club, as twitter ranting duo Joey Barton and Jose Enrique head for the exit door.

Liverpool have agreed a £5.5 million deal with Newcastle for wantaway defender Jose Enrique according to reports today in the Daily Star Sunday and Joey Barton has been told he can leave the club this month for free.

Newcastle are prepared to offload both players as a result of their recent Twitter outbursts in which the club, its owners and their transfer policy were heavily criticised.

Enrique tweeted ‘The club is allowing all the major players of the team to go. Do you think it is the fault of the players? Andy (Carroll), Nobby (Kevin Nolan).’

‘This club will never fight to be among the top six again with this policy. You fans are the best and you deserve the best, not what they are doing with the club.’

Newcastle manager Alan Pardew has responded to the criticism of the clubs transfer policy by stating that they can no longer compete financially with the Premiership’s elite clubs.

Pardew said ‘The problem is where we are now financially means that we can never really fulfil the expectations of the fans.’

‘They have memories of European football, but the gap is getting bigger as the years go by. The top clubs are getting an influx of money at Champions League level and we have sovereign states owning football clubs.’

‘It is becoming difficult to compete with the top clubs, but that is not to say we can’t compete at the level we are at. But we are always vulnerable to the bigger clubs, as Andy Carroll proved.’

‘Mike Ashley and Derek Llambias made it quite clear, the club needs to wipe its nose and therefore we haven’t got investment above our income. That is how Mike wants to run the football club.’