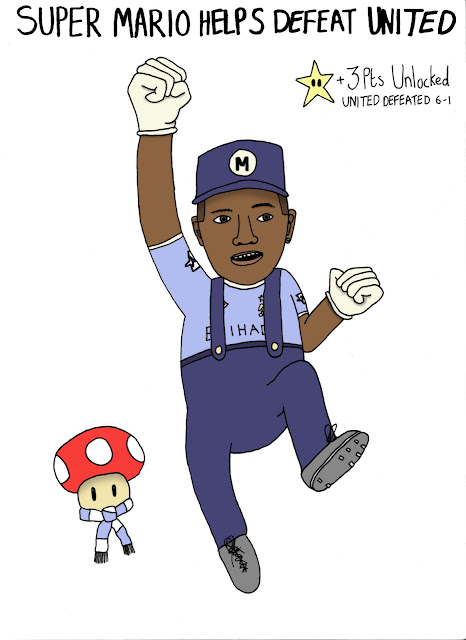 Roberto Mancini has hailed controversial striker Mario Balotelli as one of the best players in the world following the integral role he played in Manchester City’s 6-1 demolition of Manchester United at Old Trafford yesterday.
The 21-year-old scored the first two goals for City and received a huge ovation for his performance when he was taken off in the 70thminute, just a day after he was forced to flee his home due to a bizarre accident in which his house was set ablaze by fireworks.
After the game Mancini was full of praise for the Italian, comparing him with some of the world’s best players whilst also addressing his growing reputation as one of footballs most eccentric yet very likeable players.
‘I don’t know what happened about the fireworks,’ said Mancini. ‘The important thing is Mario and his friend were OK. But as far as the game went, Mario played very well. If you want to talk about Mario the football player, I put him in the first five players in the world.’
‘The problem is his age. He is young and maybe sometimes he can make mistakes. But as a player, he is incredible’

‘I hope for him, for football in general, we arrive at the day when Mario has changed completely his mind because after this he becomes one of the best three players in the world, like Messi, like Cristiano Ronaldo.’

After scoring the first goal Balotelli was booked for revealing a T-shirt with the words ‘Why always me?’ written across it, in a reference to the wealth of attention he receives from the media thanks to his off the field antics.
Mancini said: ‘I didn’t see it but it’s Mario. I think he likes to show it to our supporters because he’s crazy. Next time it’s better he keeps his shirt on.’