Hart: Silva is Half Wizard Half Weasel 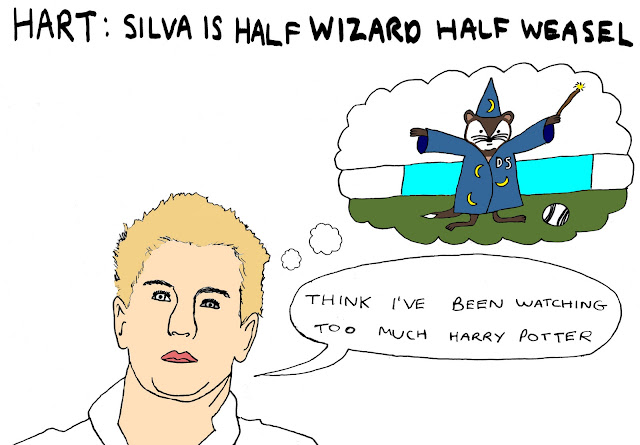 Manchester City goalkeeper Joe Hart joked that his team-mate David Silva is a combination of ‘wizard and weasel’ in response to a question asked by a fan on twitter during an interview for the Manchester City officail website earlier this week.

Silva has been outstanding so far this season for City and his performances have been instrumental in their rise to the top of the Premier League.

So when the England international was asked whether the Spanish midfielder was in fact human, he responded: ‘David Silva is a mixture between a wizard and a little weasel. More weasel than wizard.’

Hart was also asked why he wears the No.25 for City, given his prominence at the club and the availability of the No.1 jersey.

‘It’s nothing to do with superstition,’ he said. ‘I just like the number 25, and that’s what I am now, so I’m going to stick with it.’

Hart also revealed who which goalkeepers he most admired when he was growing up, as well as who he believes are the top three goalkeepers in the world currently.

‘I looked up to Peter Schmeichel and David Seaman. I would say that, right now, Petr Cech, Pepe Reina and Manuel Neuer,’ he said.

‘I don’t really watch any other leagues, but obviously we’ve seen a bit of Neuer playing for Bayern Munich.’

To watch the full interview with Joe Hart click here.