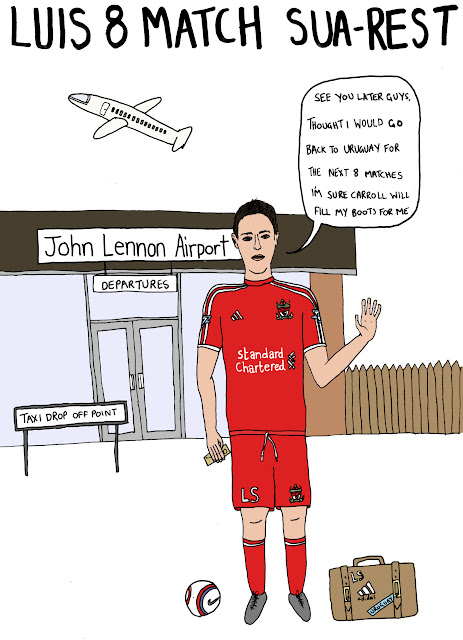 Liverpool will be without their top scoring striker Luis Suarez during a critical and potentially season defining period after accepting the eight game ban the FA gave the Uruguayan for racially abusing Patrice Evra.

The Reds will now have to chase a top four place without their most potent goal scoring threat meaning the pressure will be turned up on misfiring attackers Stuart Downing and £35 million signing Andy Carroll to step up to the plate.

Downing is yet to record either an assist or a goal since signing for Liverpool in the summer, whereas Carroll has only managed five goals in twenty five appearances and neither were able to cause the Manchester City defence too much trouble in Liverpool’s 3-0 at the Etihad Stadium last night.

Liverpool enjoyed plenty of possession against the league leaders, which they were unable to take advantage of due to a lack of ruthlessness in front of goal to the frustration of manager Kenny Dalglish.

‘I’m not so sure the scoreline reflects the way the game went,’ Dalglish said. ‘I’m not saying we deserved to win, but I think the lesson we’ve learnt from tonight is that if we’re not clinical we’re going to suffer.’

‘There are a lot of things that happened tonight that we can correct ourselves, so we need to go and do that. It’s a harsh lesson, but it’ll be even harsher if we don’t learn from it.’