The Clash of the Old School Rivals [picture] 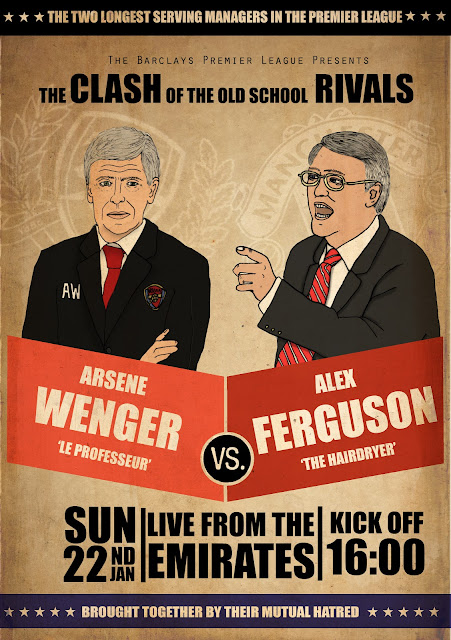 Arsenal manager Arsene Wenger will be hoping his side can avenge the 8-2 hammering they received at Old Trafford last August as they go head to head with Manchester United this afternoon.

The newest chapter in the longest running managerial rivalry in Premier League history will be written as Fergie and Wenger enter their 47th bout, with United needing a win to keep pace with league leaders Manchester City.

The Gunners enter the game off the back of two successive league defeats which has left them five points away from the Champions League places and with Liverpool and Newcastle snapping at their heels.

An old school vibe could be added to the occasion if Paul Scholes and Thierry Henry line up against each other once again, though the Frenchman has picked up a calf injury which could keep him out of the action.

Thomas Vermaelen and Mikel Arteta have been added to Wenger’s long list of injured players, whereas United have been given a boost by the news that Phil Jones and Chris Smalling are available to play after missing last weeks game against Bolton with minor injuries.

With United facing Chelsea, Tottenham and Liverpool twice in the next six weeks, Alex Ferguson has admitted that the game against Arsenal begins a defining period of their season.

‘You want to get into these games in good form,’ Ferguson said. ‘Hopefully we can navigate this clutch of games because they will be important for where we end up this season.’

Previous articleTevez to Sign for PSG [picture]
Next articleBalotelli: Dancing on Eyes [picture]