World Darts Wind Up in Response to Barton’s Twitter Rant

Joey Barton took to his twitter account yesterday to vent his frustration after being sent off for an alleged headbutt in QPR’s game against Norwich.

The former Newcastle midfielder had a fine start to the game at Loftus Road in which he scored the opening goal, but he received marching orders following an off the ball incident with Bradley Johnson.

The red card proved costly as Norwich went on to win the game 2-1, which left both QPR manager Neil Warnock and Barton complaining that the Johnston had conned the referee Neil Swarbrick and his assistant David Richardson.

Barton tweeted: ‘Well feel for the officials, they’ve been conned.’

‘Admitted to me at HT they never saw it. I was pulled back 1st, then kicked 2nd!’

‘Linesman definitely never saw it, all he seen was Johnsons reaction.’

‘I’d be 1st to apologise if I’d reacted. Cannot apologise as I know I’ve not head butted anyone.’

‘Disappointed for the lads and the fans.’ 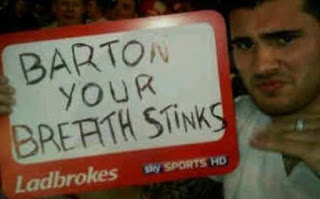 To rub salt in Barton’s wounds, Bradley Johnson used the the World Darts Championships at Alexandra Palace to respond to the days events.

Johnson made his feelings known by holding up a board that read: ‘Barton, your breath stinks’ during the darts match that was televised on Monday night.

Who will win in this epic battle of wits?