Feed the Ox and He Will Score [picture] 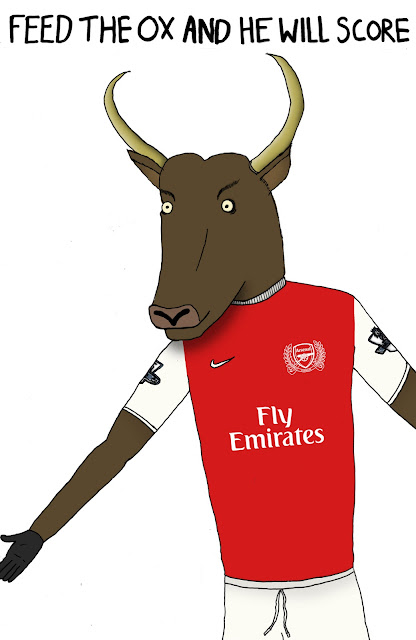 Arsenal manager Arsene Wenger has heaped praise upon up and coming star Alex Oxdale-Chamberlain following the eighteen-year-olds central role in the Gunners 7-1 victory over Blackburn on Saturday.

Oxdale-Chamberlain scored either side of the half time break in a performance which prompted his manager to compare him with Wayne Rooney’s early performances in the Premiership and to those of former Arsenal star Cesc Fabregas.

‘I feel that is always a brand of top players,’ said Wenger. ‘They just play. When you saw Rooney start he played like it was natural; the same with Fabregas. They are happy on the football pitch and comfortable.’

‘I feel Oxlade-Chamberlain could play central midfield and he could play second striker because he has something that is exceptional, he has a short back-lift and so when he has a shot on goal it’s difficult to block.’

‘He can go right and left and he is the kind of guy who feels comfortable on the football pitch, not nervous.’

After becoming one of Arsenal’s most important players in such a short period of time, Oxdale-Chamberlain has been touted by some to feature in England’s senior Euro 2012 squad, but for now he insists he is only concerntrating on keeping his place in the Arsenal starting line-up.

‘It would be very nice,’ Oxdale-Chamberlain said in response to the suggestion of him making the England team. ‘But I must keep my feet on the ground.’

‘I have belief in myself and my own ability. I’ll keep working hard then I hope the rest will come. I’m in the England Under-21 squad and playing for Arsenal, I’ll concentrate on that.’