Return of the Incredible Emile [picture] 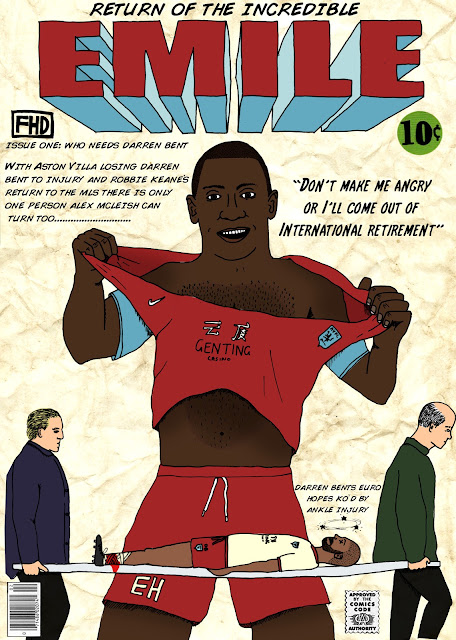 Aston Villa are in need of a goal scoring hero to step up to the plate following the news that their top scorer Darren Bent will be out for the rest of the season with an ankle injury and veteran striker Emile Heskey could be the man to heed the call.

Bent’s injury coupled with the end of Robbie Keane’s loan spell means that Alex McLeish short on striking options and the Villa boss has stated that although he is disappointed with the situation, it will provide an opportunity for other squad members to take on the goal scoring responsibility.

Speaking after hearing news of Bent’s injury, McLeish said: ‘You don’t want to see any player have that bad luck. It is a big loss to us, such is his prowess as a goalscorer, but it gives an opportunity to others.’

‘We have other players who have to take the responsibility, players such as Gabby Agbonlahor and Stephen Ireland. That’s the great challenge for them.It’s also a chance for them to show they can handle that type of responsibility.’

McLeish only has Gabriel Agbonlahor and Heskey to choose between up front for the rest of the season, meaning the big man could well get a chance to impress and build upon the one goal he has already bagged himself this season.

With Rooney suspended for two games and Bent injured the England squad will also be short on strikers for Euro 2012, sparking fears that the Incredible Heskey may come out of retirement for the tournament.

For England’s sake, let’s hope not!

Previous articleLiverpool Carling Cup Artwork!! & Players Twitter Reaction To Victory
Next articleHell of a Time for Next Blues Boss