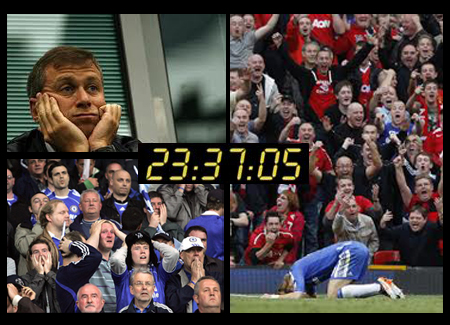 We learnt from the action packed adventures of Jack Bauer that a lot can happen in 24 hours. However the opposite can also be true judging from the misfiring misadventures of Chelsea striker Fernando Torres, who is nearing 24 hours of pitch time without a goal.

The Spaniard hasn’t scored since his double against Genk last October and has only netted five times for the Blues since his £50 million transfer from Liverpool.

Torres did not feature in Roberto Di Matteo’s starting line up in Chelsea’s win against Stoke on Saturday and his place in the Spain squad for Euro 2012 is under threat as a result of the lack of goals for his club team.

Spain boss Vicente Del Bosque has stated  that a place in the Spain Euro 2012 squad is there for Torres to take, but only if he is able to rediscover the goalscoring form he was formerly renowned for.

Del Bosque said: ‘I will wait until the last minute to decide about and Torres. Torres must recapture his goal instinct during the next few months.’

‘I watched Chelsea’s FA Cup win over Birmingham and he worked hard. I have confidence in El Nino, but need to wait before a final decision.’