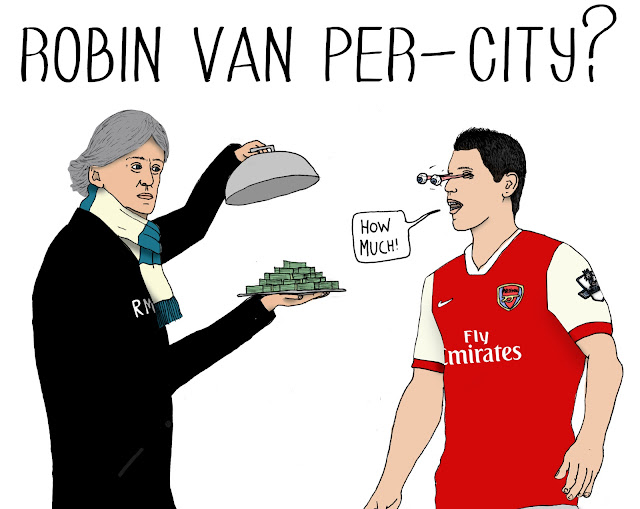 Over the past few seasons Manchester City’s have used their financial might to cherry pick some of Arsenal’s best players and there is now speculation that they have Premiership top scorer Robin Van Persie in their sights.

Transfer rumours have been flying about Van Persie as a result of his decision to delay contract talks with Arsenal until the end of the season and recent comments made by Roberto Mancini have added further fuel to the fire.

Speaking in regards to the Arsenal star, Mancini said: ‘I think Van Persie at this moment is one of the best strikers in Europe with Messi, Ronaldo, Sergio and Mario. I think if there is a good player who wants to leave a club, then we are interested.’

The Sunday Times has reported that Manchester City have offered a £210,00-a-week contract to the Dutch striker who has scored 25 goals in 27 games so far this season, but Arsenal boss Arsene Wenger has insisted that RVP will remain with the Gunners.

‘We will not lose anybody to Manchester City, or to anybody else because we want to keep our players,’ the Wenger said.

‘We want to keep Robin Van Persie, that is clear, we will do everything possible to extend his contract, that is clear, and apart from that, I can only let people talk.’