The Return of Fernando Torres [picture] 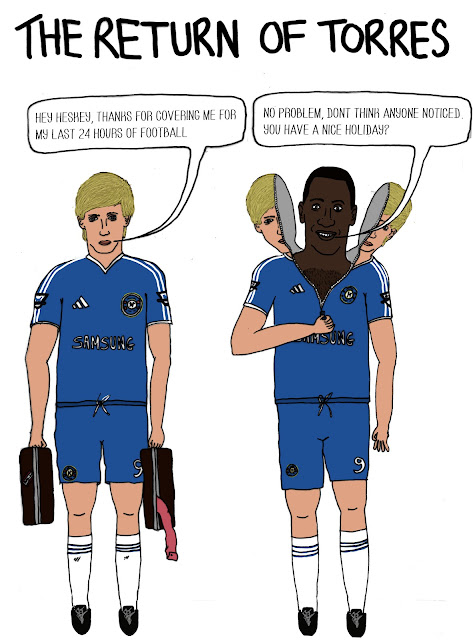 After racking up a grand total of 24 hours and 41 minutes of time on the pitch without a goal Fernando Torres finally brought an end to his barren run yesterday, scoring a brace to help ease Chelsea past Leicester into the semi-finals of the FA Cup.

Speaking after the Blues 5-2 victory Torres spoke of the relief he felt to finally get back on the score sheet, stating: ‘I needed those goals. I was working so hard to get them. In the last month the team is much better. We have more commitment and we’ve shown in the last four games we want to finish the season well.’

The Spaniard also supplied two assists during the victory and gave credit to his team mates and new boss Roberto Di Matteo for keeping faith in him during a difficult period for him at the club.

‘I think maybe this season I am playing at a very good level but I was not scoring goals in this period and the job of the striker is to score goals. So if you don’t do it then the people think you are playing badly but for me the main thing is the support of the people.’

‘They have all been with me,’ he added. ‘The team-mates, the staff. I feel the confidence of the manager now and obviously it is a good time for me and for Chelsea.’

Di Matteo, who has won all four games since taking over from Andre Villas-Boas a fortnight ago gave praise to the hard work that Torres has put in at the club.

‘I think the whole team, the club and supporters are happy for Torres,’ said Di Matteo. ‘He works so hard for the team, he is a great team player. You get rewarded when you work hard in life and I think we are all happy that he helped us win.’