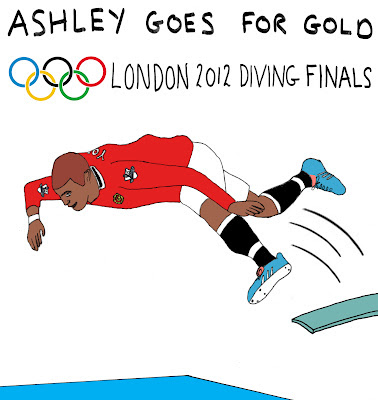 Alex Ferguson has spoken with Ashley Young warning him not to go down too easily following a fortnight of accusations that the United midfielder is one of the Premiership’s most prolific divers.

Young has come under fire after winning controversial penalties in for United against QPR and his former club Aston Villa, which prompted Newcastle’s Ryan Taylor to take to his twitter account to state that: ‘Ashley Young is an absolute DISGRACE. He’s the biggest cheat in the league.’

Fergie was willing to admit that Young had overdone it when he won the penalty against Villa, but stated he still had some way to go before catching up with the diving antics of Real Madrid, Bayern Munich and Chelsea.

‘I have had a word with Ashley,’ said Ferguson. ‘He understands where we are coming from. Hopefully it makes a difference.’

‘Last week, if the player doesn’t bring Ashley down he is going to score. It was a clear goalscoring opportunity.’

‘He did overdo the attempt to get a penalty but I watched Real Madrid and Bayern Munich the other night and it was absolutely ridiculous, players were diving and rolling about, nothing like what Young has been accused of.’

‘You see the other night in the Chelsea game, we are in an age where you expect it now.’