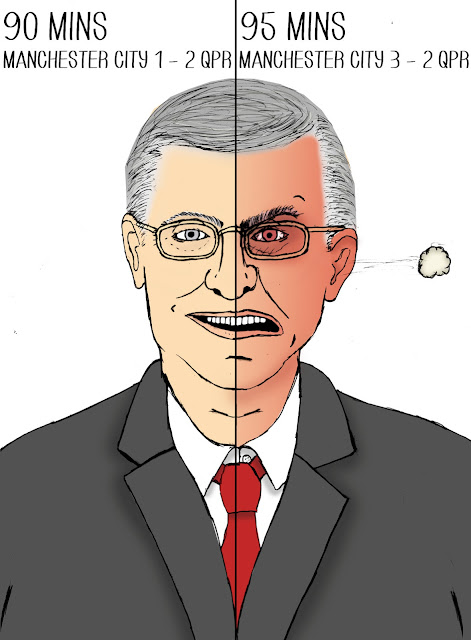 Sir Alex is known for being red faced at the best of times, but after having the Premiership title snatched away from his grasp as noisy neighbours Manchester City staged a dramatic extra time come back against QPR on Sunday he was definitely a deeper shade of beetroot.

Sergio Aguero’s goal with just a minute of stoppage time left to play is certain to haunt the nightmares of United fans for years to come and Chief Executive David Gill revealed Fergie had lost sleep on Sunday night due to the seasons conclusion, but began making his bounce back battle plan for next term the next morning.

‘He didn’t sleep much on Sunday night. None of us did. He was in the office at 7.30 on Monday morning already thinking about next season,’ said Gill at the Premier League 20 Seasons awards yesterday. ‘We have to get on with it now. We can’t look back and feel sorry for ourselves. We have started planning for next year. We will come back fresh and I am always confident with this manager.’

Speaking at the United’s Player of the Year awards dinner Fergie stated that moving forward the club would stick with their policy of investing in young players, whilst admitting that they would not be able to compete with the financial might of City in the transfer market.

‘We invest in young players, that is what we are good at,’ said Ferguson. ‘We’re not like other clubs who can spend fortunes on proven goods. We know that City are going to spend fortunes, pay stupid money, pay silly salaries and all that. We can’t do anything about that. We concentrate on what we can do to try to bring players in for the right reasons.’