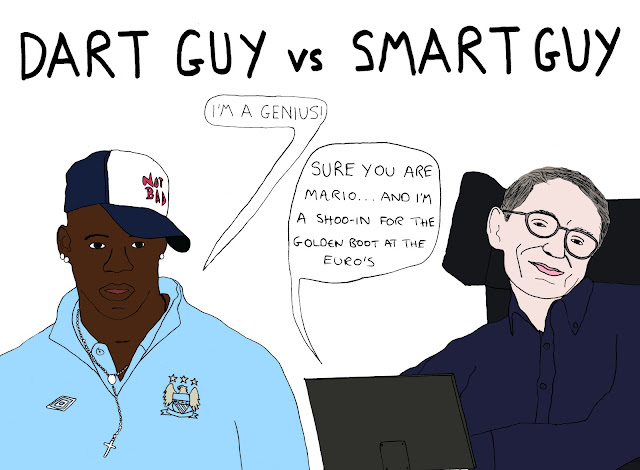 They say there is a fine line between genius and madness and though many would claim that Mario Balotelli exhibits more of the latter, the enigmatic Italian would beg to differ.

Famous for his madcap antics which have included lobbing darts at team mates and experiments with fireworks, Balotelli has spoken of his above average brainpower as well as his desire to become the best player in the world.

Despite previously having difficulty putting on a training bib, the 21-year-old stated in an interview  this week that the reason many people have trouble understanding his behaviour is because he is a genius.

‘I think I am a genius, but not a rebel,’ Balotelli told France Football. ‘I have my life, my world. I do what I want, without annoying anyone. I believe I am more intelligent than the average person. It is said that geniuses are misunderstood. So perhaps genius is so different that people don’t understand.’

‘The talent God gave me is beautiful and wonderful, but it is difficult because you are always facing other people keen to judge you. There are few people with such talent, so there are few able to judge what I am doing.’

‘My dream is to become in time the strongest footballer. I know I am strong, but if I go on working I know I can become much stronger. The Ballon d’Or is the most important title after the World Cup and European Championship. It is an objective. I think I could be able to win it one day but I still have to work a lot.

‘When I decide to score, I score. I know I am strong, but I believe it is not enough yet. I can kick fine, dribble very well, but I still have to improve.’