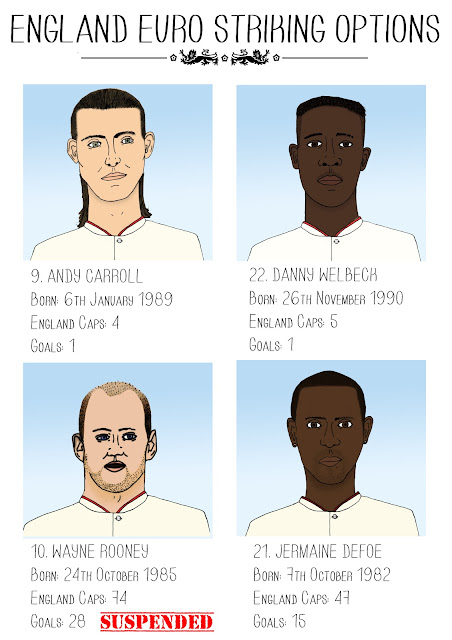 Alan Shearer has urged Roy Hodgson to put his faith in the goal scoring threat provided by Andy Carroll when England face Sweden in the second game of the group stage on Friday.
Hodgson singled out the final third of the field as the area that needs to improve the most after England’s opener against France in which they only managed to get one shot on target and Shearer has stated his belief that Carroll’s physical presence is what is neccessary to bolster the Three Lions attack.
Danny Welbeck was selected ahead of Carroll in England’s opener and received praise for his performance, but based on the games played in the tournament so far Shearer believes the teams taking advantage of their big forward players will enjoy the most success.
Writing in his column in the Sun, Shearer stated: ‘Poland, England, Ireland, Germany, Ukraine and Croatia twice all scored headed goals. All bar one, were from very good deliveries too. Big men getting on the end of good crosses.’
‘We play Sweden next and look what Andriy Shevchenko did to them. He is 35 now and when strikers get older it is that pace over 20 yards that goes. He didn’t cause Sweden a problem by getting in behind their defence.’
‘But over a few yards, he beat Olof Mellberg and Zlatan Ibrahimovic to get on the end of quality crosses to head Ukraine to victory. We can defend those situations much better than Sweden did.’

‘What about us getting those balls in at the other end? Joleon Lescott’s execution with his head for our goal was superb. But, right now, this tournament is made for Carroll. Every defence seems to be struggling with the aerial threat. I would not have him in there at the expense of Danny Welbeck either – but alongside him.’

Anyone looking for a one stop shop for a uk online casino need look no further than onlinecasinos.co.uk!
Like Flaminghairdryer on Facebook
Buy FHD Artwork!