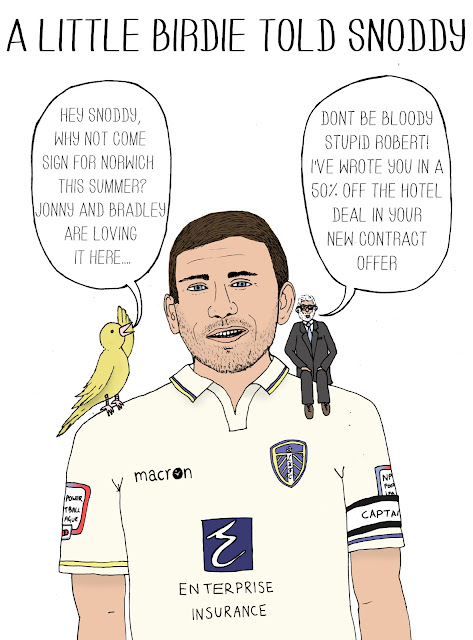 Sky Sports today reported Norwich city have renewed their interest in Leeds United’s highly rated captain Robert Snodgrass. Norwich have a habit of hand picking Leeds United best players, with former captain Jonny Howson and Bradley Johnson joining the Canaries in the last couple of years.
Robert Snodrass has currently not signed  his new contract offered by Warnock and criticised the clubs lack of ambition under Ken Bates. Snoddy would be rubbing salt into Leeds wounds by replicating Howsons move, especially after being made captain himself by Warnock. Snoddy stated  ‘We missed Howson, weird that we never replaced him. How can you say you’re aiming for promotion and then sell your captain?’
Snodgrass has stated he is happy at Leeds and happy where he is living, it seems the only stumbling block to his contract is his Premier League ambitions. Many Leeds fans hope Snodgrass will hold out till the rumored takeover of Leeds United is completed. The new owners investment will hopefully result in decent signings  to  match Snodgrass’s  ambitions .and persuade him to sign a new deal.

Ex-Norwich manager Paul Lambert is also rumored to be interested in signing Snodgrass at his new club Aston Villa. Snodgrass has just one year left on his contract at Elland Road and it is believed a bid of around £5million would be hard for Warnock to turn down.