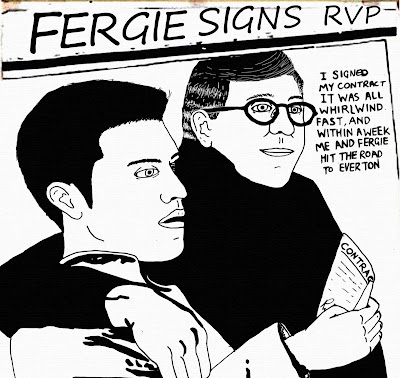 New signing Robin Van Persie is set to make his debut for new club Manchester United at Goodison Park this evening, following the completion of his £24 million transfer from Arsenal last Friday.

Alex Ferguson now has a wealth of attacking options to choose from as he looks to wrestle the Premiership title back from Manchester City this season and comparisons have been drawn with United’s treble winning strike force of 1999.

Fergie is keen to unleash his new signing in United’s opening game against Everton and it is hoped that he will develop a fruitful strike partnership akin to the one that Andy Cole and Dwight Yorke enjoyed.

Speaking about RVP’s upcoming debut, Ferguson stated: ‘He hasn’t played much. We are going to assess him the next couple of days and chat with him, see how he feels himself.’

‘Adrenalin will help, if I choose to start him, but I think it’s important he had a training session on Friday morning and hopefully the weekend will give me a good idea on whether he should start or I should put him on the bench.’

Van Persie’s arrival at Old Trafford is likely to limit the amount of opportunities Javier Hernadez and Danny Welbeck will get to play, possibly hindering their development. However, Fergie has stated his Young strikers can learn and benefit hugely as a result of the Dutchman’s presence at United.

‘We have had several players who have been that sort of catalyst, starting with (Eric) Cantona, I don’t think we’re short of all that, I think we were still capable of winning the title without Robin but he gives us a sort of certainty for the future.’

‘You always learn from great players, if you look at what Cantona did, he was a tremendous teacher for all the young players and I think Danny will welcome that.’