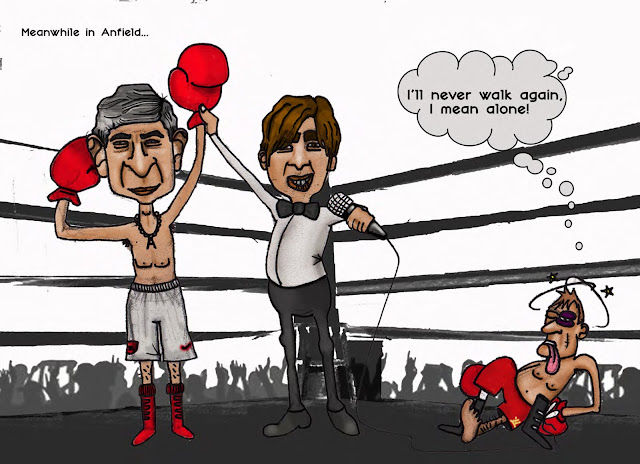 The Liverpool – Arsenal fixture is one that always excites and has produced some of the greatest moments in Premier League history. Both clubs always come in to this match looking for a win and this one was no different. This time the two clubs came in to the match still seeking their first win of the season which further fuelled the fires that so often make for the fast-paced, entertaining matches that the English first division is so widely renowned for. One team won, one team lost. This is my opinion on why:

Key players failing to produce
For all the tactical know-how of both managers and the tactics they did indeed implement against each other during the game, one thing let Brendan Rodgers down that he had practically no control over: his stars failed to shine.

Upfront, Suarez and Borini made a real mess of the attack, showing little if any penetration and a complete lack of composure on the ball. 17-year-old Sterling was by far the most impressive of the front three and looks a promising talent. However, at his age, the responsibility for scoring and creating goals does not fall on his shoulders. Borini looked lost out on the right flank and Suarez’s tactic of falling down whenever the wind blew probably cost him an all-important penalty decision.

At the other end of the pitch, Pepe Reina failed to inspire much confidence either, his poor attempt at stopping Cazorla’s well-struck but straight forward strike going under his arm and into the net. It was hardly the performance Liverpool fans have come to expect from the usually consistent and reliable keeper, who has now made three slip-ups in as many matches. It would hardly surprise me if he started the next game on the bench.

Finally, the captain, Stevie G, who is undoubtedly one of, if not, THE most important player in this Liverpool side. Gerrard was quiet for most of the match and his mistake in midfield led to the first goal. Personally, I think his age has begun to take its toll and while he may be an immensely talented player, he can’t keep playing back-to-back matches without suffering from the effects of fatigue. Rodgers may need to seriously consider the number of times in a row he puts Gerrard on the pitch if he wants his talisman in top form.

Full backs neglecting their defensive duties
Glen Johnson and Jose Enrique both had decent games going forward on the attack, with the latter especially making dangerous passes and feeding Sterling down the wing and Suarez down the middle. However, neither had a very good game defensively and Johnson was especially to blame since both goals came down his flank.

The tactic Liverpool seemed to be employing was to stretch play with width from the fullbacks, allowing the centre of the park to become more open and allow for the tiki-taka passing style Rodgers favours to be made a little easier. Unfortunately, neither got back to fulfil their duties as defenders, often leaving Agger and Skrtel in a two-on-two situation, and while the centre back pairing are good in the air, on the ground they simply lack the pace and agility to be comfortable in such a situation. A clear example of this was the first goal, which saw Podolski race past a nonchalant Johnson to receive a fantastic ball from Cazorla and a wonderful finish to boot. The second saw Glen Johnson so amazed at the sight of the 5’6″ Spaniard running in front of him with the ball, that all he could do was stand and watch. The shot was good, but, as previously mentioned, Reina should have done better.

A disorganised midfield
Aside from Steven Gerrard’s uncharacteristically quiet game, Joe Allen and Nuri Sahin (on his debut), while obviously individually talented (Joe Allen achieved 93% pass completion) did not play to each others’ strengths, or to the benefit of the team.

The pair played alongside each other in the holding role, but it was clear that they were both performing the same function. Both were playing the deep-lying playmaker role and that left the defence rather threadbare as a result. If the fullbacks in your side are advancing up the pitch to aid the attacking play, then it is absolutely essential that you have a holding midfielder sit back and make that defensive tackle for them. As it turns out, neither player performed that role and 9 of 11 players were caught up the pitch pressuring the Arsenal defence and were unable to protect their goal.

You can blame Rodgers for not setting this out to his holding midfielders before the game, but only to a certain extent. I think it is more bad luck that their main enforcer has gone out injured in Lucas Leiva and that Rodgers now has to tell an attack minded midfield player to sit back a bit more and defend. But how on earth do you explain the importance of defending to several egotistical, over-ambitious, money-fuelled young men? Liverpool fans will just have to hope one of them listens, for the sake of the whole team.

Where’s Carroll?
Now, the sound of mind among you must surely be thinking: “this idiot doesn’t really think that Andy Carroll could’ve won the match for Liverpool does he?”, and, well, you’d be right, I don’t. But it must be said that Carroll would have given a different dimension to a paper-thin Liverpool side with very few options on the bench (when you have to bring on a man who recorded a grand total of no goals and no assists in the EPL last season, you know you’re in trouble).

This current crop of players is still learning the Rodgers system and until they fully settle into it they will, occasionally, revert back to they methods they used under Dalglish and when you’re sending an aerial ball into the box, the 6ft 3in frame of Andy Carroll makes for a much easier target. In addition to that, tiki-taka won’t work for you every time. Sometimes you need to mix it up a little to get results and as of now, Rodgers does not have the options required to do so.

Conclusion
Liverpool have a talented crop of players under a talented manager. But in the end they were beaten by a superior Arsenal side that controlled the midfield and were let down by many of their key players. The lack of solid transfer activity is going to mean Rodgers will have to come up with some magic during the two-week international break, or both he and his club are at risk.