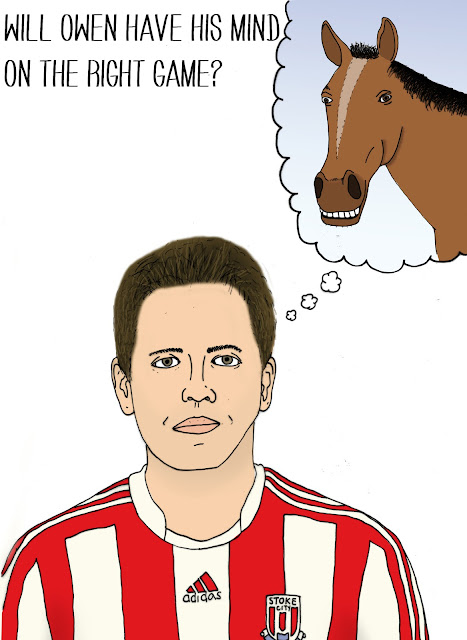 With his stables just a few miles away from the Britannia Stadium, Michael Owen will be able to indulge his love of horse racing as well as a bit of football following his move to Stoke this summer. However, manager Tony Pulis will be hoping the 32-year-old has his mind firmly set on bagging goals for the Potters rather than the nag’s this season.

If Owen were a horse he would likely have been sent to the knacker’s yard a long time ago due to his injury prone nature, but the former England favourite has stated he wishes to prove he can ‘stand the rigours of a full season’ throughout his 12 month pay-per-play contract with Stoke.

Whilst the odds of him picking up another Premier League winners medal are steep having left his bench warming role at United, the chances of him playing regular football are far more favourable at Stoke. That is if he manages to stay free of injury, of course.

Though many doubt that Owen will be able to recapture the kind of form that won him the Ballon d’Or in 2001, his former England and Liverpool strike partner Emile Heskey has spoken of his belief that there is still a future for him in the Premiership.

Speaking to talkSPORT, Heskey stated: ‘I definitely think he’s got a lot still to give. You know everyone is going to look at your injuries and that kind of thing but Michael will get as many goals as anyone else and he’s proving that. The main thing is proving that he can stay fit. When you talk about goals and ability then he’s up there with the best of them. I don’t think Roy Hodgson should ignore him either.

‘There is a new crop of lads coming up but they can learn from what Michael has done, being around people like Michael will always help. Everyone knew about Michael from the age of 16 and the ability that he had and he was able to deal with that pressure so he has got a lot to give back too.’

Owen will be hoping for his first Premier League start for his new club when Stoke face Chelsea on Saturday afternoon, although he may have to settle for a place on the bench until he is able to regain his match fitness.