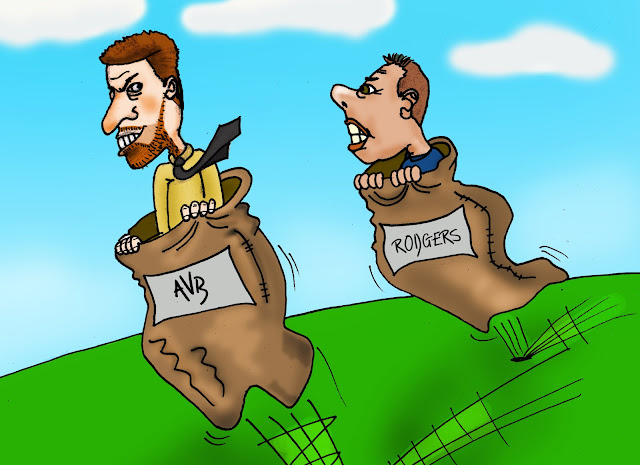 To kick this off, let me present you with some raw data on our prime contenders for this thrilling race. This is both managers’ first season with their respective sides and neither has gotten off to a particularly bright start. In the red corner of this globally manager-feared contest, we have Brendan Rodgers, who has achieved a measly 2 points from 4 games, his new side scoring just 3 goals and conceding 8, leaving them in 17th place (just above the relegation zone) with -5 goal difference. In the white corner, we have Andre Villas-Boas, with a slightly better 5 points from 4 games, his side scoring 6 goals and conceding 5 and they sit at 10th place with +1 goal difference. Current Europa League Betting odds have both teams amongst the favourites to win outright, with Liverpool at 10/1 and Tottenham at 12/1.

Neither manager has really breezed through these first four games, although Tottenham’s first win of the season over newly-promoted Reading last night gives their campaign start a slightly more respectable look. However, it must be said that Liverpool have had significantly tougher fixtures, including matches against the likes of reigning champions Manchester City and an in-form Arsenal. Spurs’ toughest fixture by far was their opening game against Newcastle, a match they lost.

Now that we’ve had a brief look at the stats of the first 4 games, let’s talk about a few positives and negatives each manager brings to the club.

For starters, neither manager is at all experienced, in age or in Premier League managing time. Rodgers has a slight edge here at age 39 and having been at the helm for the entirety of Swansea’s excellent début in the English top flight. Villas-Boas is little more than a kid by managerial standards and at 34 he is the youngest current Premiership manager. His 9 month spell at Chelsea off the back of a sensational unbeaten run at Porto ended very badly, with him losing his job to current Chelsea manager Roberto Di Matteo. Against some of the more experienced top-level managers, they may struggle to cope with tricks the old dogs have picked up over the years (Ferguson’s infamous mind games spring to mind rather quickly). AVB in particular here has not proven himself well when it comes to dealing with pressure, becoming used to having little at Porto and his first real high-pressure challenges during his time at Chelsea ended in absolute disaster.

Two words: Transfer dealings. This may well have been the most difficult aspect of each manager’s new job at their respective clubs, seeing as they were both thrown in at the deep end with concrete blocks tied round their ankles. Metaphorically, of course. Rodgers had to deal with a distinct lack of transfer funds (Reds fans, you can go ahead and blame ‘King Kenny’ for that one, he certainly spent like a king… 20 million for Jordan Henderson… good grief) and thus was only able to bring in minor reinforcements, famously (and no doubt frustratingly) missing out on Clint Dempsey, who – funnily enough – went to our contender in the white corner. Dempsey was meant to be the replacement for surplus-to-requirements England man Andy Carroll. However, loaning him out without bringing in any actual replacement has left Liverpool with little or no options upfront and Rogers has admitted this bit of transfer business to be a mistake. January recall maybe? All this coupled with the lack of transfer deadline day action had Liverpool fans in uproar.

AVB had his own transfer problems, having his hands tied in losing Modric and then making the utterly mind-boggling move of opting to sell his best attacking midfielder in Van der Vaart. He has arguably done a decent job in replacing them, bringing in Dembele, Sigurdsson and Adebayor alongside the aforementioned Dempsey. But we can’t end on a happy note – oh no. To top it all off the young Portuguese caused himself many months of consistent migraine with this Hugo Lloris/Brad Friedel business and despite the former being an unquestionably quality signing, Villas-Boas seems to have not the slightest idea how to deal with Friedel’s top form and Lloris’ top quality. His decision to keep the American between the sticks may have been the right one, but the hesitation with which he went about it can only breed doubt amongst fans and players alike.

Finally,there is the style of play and expectations of the respective teams. Liverpool was a side that played attractive passing football once upon a time, but since then they have become a team known for hoofing the ball forward unnecessarily. For three years running now, Liverpool have missed out on Champions League football by failing to make the top four. Yet, expectations have not significantly lowered and the task Rodgers has set out to do – bring good quality football back to the Reds and eventually get them back competing among Europe’s elite – is one that has become very difficult, but in the long run, could hugely benefit the club and bring a sense of stability that the red half of Merseyside haven’t had for a long time. Villas-Boas, on the other hand, has joined a club that has consistently made the top four in recent seasons and while you could argue that that constitutes more pressure, it is a pressure his team have become accustomed to. Also, AVB has more players suited to his high-line, constant pressure style of football than Rodgers has at Anfield that are suited to his tiki-taka style.

My personal opinion is that despite AVB’s statistically better start to the campaign, Brendan Rodgers’ clear sense of purpose and ability to blame unfortunate circumstances will keep him in his job longer than AVB, as I can only see him crumbling under the greater pressures sure to come later in the season.

An interesting set of stats to finish off with. Bookies odds for AVB and Brendan Rodgers to lose their jobs:

It seems like I’ve backed Rodgers against all the odds here, but we’ll see how it all plays out at the end of the season!