Can Rooney Control his Dark Side? [picture] 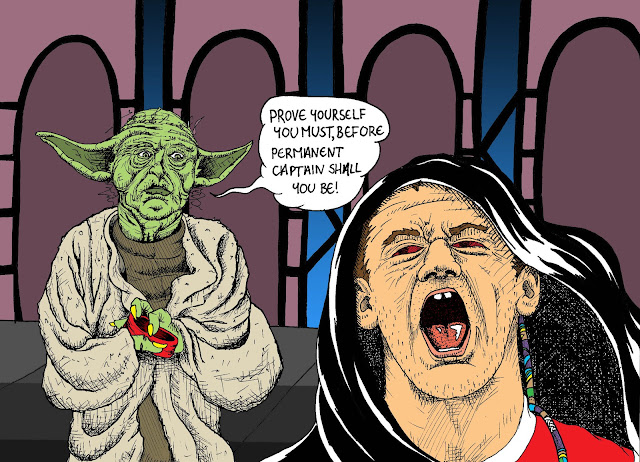 Roy Hodgson has backed Wayne Rooney to become England’s permanent captain in the future, despite the numerous occurrences of indiscipline that have arisen throughout his career. The Manchester United forward was given the captains armband in Steven Gerrard’s absence for England game against San Marino last Friday.

Many have questioned if Rooney can cope with the added responsibility of captaining England, though some have claimed he has matured since his sending off against Montenegro in 2011 that led to a two game suspension for Euro 2012. There was no sign of Rooney’s dark side when he scored a brace in England’s 5-0 over San Marino in which he moved into fifth place in England’s all time scorers list.

When asked if Rooney was a future England captain after Friday’s game, Hodgson stated: ‘Yes, he was my vice-captain at the Euros from the moment he could start playing again. He does take playing for England unbelievably seriously. I know being captain is something he’s very proud of and something he wants to do. Frank Lampard has captained the team when both Steven (Gerrard) and Wayne were absent. But I always had in my mind that Wayne would be the vice captain and when Frank comes back I suppose I’ve got a decision to make.’

Rooneys’ Manchester United and England team mate Tom Cleverley has also championed his leadership skills for club and country stating that: ‘Wayne has got all the attributes to be a top-class captain. He is a leader, a winner and I like playing underneath him as a captain. Wayne was quite vocal in the dressing-room before (the San Marino game). He was chipping in with points for the team, to improve the team. We are lucky at my club too – we have got so many people you can go to.’

‘For quite a young guy, Wayne has had a lot of experience that myself, Danny Welbeck and all the young players in the squad can tap into. So he is definitely someone you could go to. He is approachable and someone you can get advice from.’