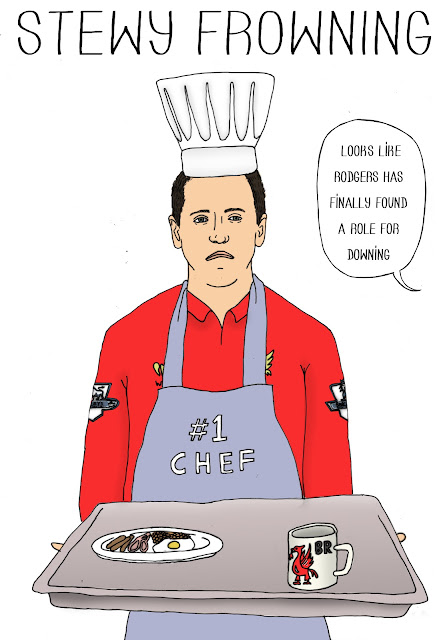 Stewart Downing’s Liverpool career hit a new low last weekend, when he was left out of the squad for Sunday’s Premier League game against Stoke. Downing has been on a downward spiral this season, having not started a Premiership game since Liverpool’s opening game against West Brom.

The former Middlesbrough player didn’t get off to the best start following his £20 million move from Aston Villa in July 2011, completing his first season in a Liverpool shirt without a single league goal or assist. Things took a further turn for the worse with the arrival of Brendan Rodgers, who suggested Downing might better off playing as a left back rather than his traditional role on the wing.

Rodgers has been outspoken in his criticism of Downing since taking over at Anfield and has recently questioned whether the 28-year-old has the self-motivation and hunger to succeed required to fight for a place in the Liverpool team. Downing has spoken out in response to the comments made by his manager, who accused him of not being willing to put his body on the line while playing for the club.

‘I’m disappointed,’ said Downing. ‘If that’s how the manager sees it then there’s nothing I can do. I would have preferred it if it was private. I was upset but you’d have to ask the manager what he meant by it. Bravery is a lot of things. It’s not just tackling. Bravery is also taking the ball when you are losing the game and trying to create things. That’s what I try to do.’

‘I was surprised that it came out. I’ve obviously spoken to him on numerous occasions about different things when I wasn’t in the team, private things, but the only thing I can do is keep playing well. I’ll fight, I’ll fight every day. I have done that since I was 10-years-old when I was trying to get through at Middlesbrough.’

‘I fought very hard when I was at Aston Villa to do well for them and get a good move to Liverpool. I’ll fight for a place here. My aim is to get back in the team and prove the manager wrong.’