Back to Toon for Carroll? [picture] 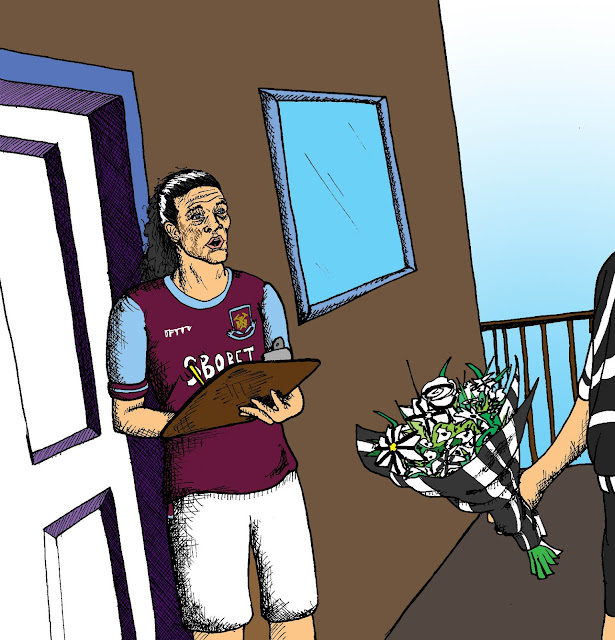 Newcastle manager Alan Pardew has opened the door for Andy Carroll to make a sensational return to the club he left in January of last year. Speaking about his former player Pardew confirmed his intention to resign the striker should the opportunity arise in the near future.

The 23-year-old is currently on loan at West Ham after being cast by new Liverpool manager Brendan Rodgers and Pardew has made it clear there is a place for him at his hometown club when he is ready to make his next permanent move.

‘He’s a Liverpool player and not wanted so at some point he’s going to move permanently. I’d like to think we’ll be in the mix for that,’ said Pardew. Speaking of Carroll and former Toon midfielder Kevin Nolan, Pardew stated: ‘Big Andy, hopefully, one day will want to come back and certainly I’d like to have them both in my squad now because we would be stronger for it.’

Pardew attempted to resign Carroll in this summer’s transfer window and has been hugely complimentary about the attacking threat he adds to a team playing as a No 9 striker.

‘I like working with him, he was brilliant for me,’ said Pardew. ‘There was a point this summer when there was a possibility of it. We were in there because he brings something different to what we have got and we could probably do with another striker. We were right in there but unfortunately we weren’t able to get it done at board level.’

‘I’ve always stuck up for him and I still think he has a role for England. As a No 9 there are times and periods in international games where an England No 9 can still be a massive threat. People keep talking about the modern game, a loose No 9, the way Spain and Barcelona play, but there is still a place at the top level for a player of Andy’s qualities. He’s one of the best No 9s out there.’

Previous articleChelsea v Liverpool Match Preview
Next articleRelief for Adkins but is Hughes closer to the sack?