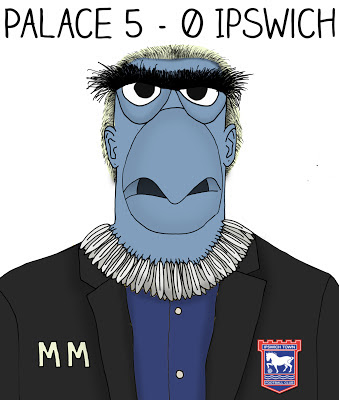 New Ipswich manager Mick McCarthy received a nasty wake-up call last night when his side were beaten 5-0 at the hands of Crystal Palace.

After a dream start last Saturday with a 1-0 win over Birmingham, McCarthy was given a severe reality check as his side were easily dispatched by Ian Holloway’s new team.

McCarthy described the defeat as a ‘sobering experience’, but explained that he wasn’t expecting to solve his new sides problem’s overnight.

Speaking to the BBC, McCarthy stated: ‘That’s highlighted our frailties. It was a sobering experience. But I didn’t come away from Birmingham thinking we’d turned a corner, that everything was going to be OK.’

‘I’ve certainly learned a lot. I’ll learn even more when I watch it back in the morning. There’s a lot to look at. It’s really disappointing.’

McCarthy’s men conceded three penalties in 11 minutes early in the second half of the game against Birmingham, ensuring they would suffer a ninth defeat in fourteen games to keep them rooted to the bottom of the Championship.

‘I’ve never seen a team concede three penalties at all – never mind in 11 minutes. It was bizarre and it’s killed us off completely,’ said McCarthy.

‘The penalties, I’m undecided on. It’s disappointing for all the fans that came. I was probably encouraged a little bit in the first half. It’s so disappointing in the second.’