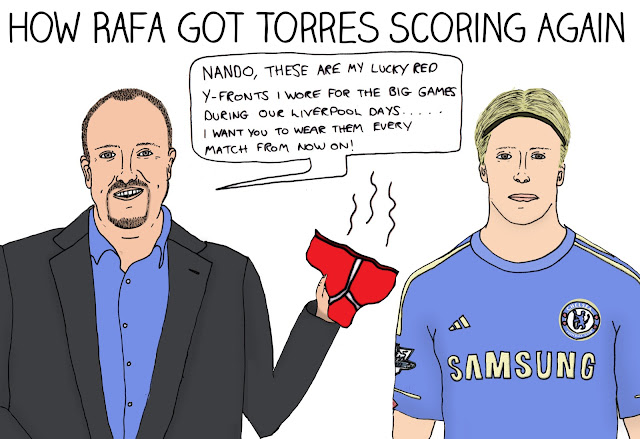 When Rafa Benitez began managing at Chelsea he had to resort to praising the defensive efforts of misfiring striker Fernando Torres in response to critics who believe he is still failing to justify his £50 million transfer fee.

Now Benitez is over five weeks into his interim role as Chelsea boss and he believes that Torres is getting closer to the goal scoring form that was expected of him when he made his transfer from Liverpool to Stamford Bridge.

Torres has now scored seven goals in his last six games and was the first player on the scoresheet in Chelsea’s 8-0 demolition of Aston Villa last Sunday. Speaking about the upturn in Nando’s goal scoring fortunes Benitez stated that addressing his confidence issues is key to reviving the Torres of old.

‘He’s a striker. He needed to score goals. The team is doing well, he’s having more chances and he has more confidence as a result,’ Benitez said.

Chelsea are currently short on striking options and with Daniel Sturridge looking certain to be leaving shortly Benitez has recognised the need to bring in new talent to provide more competition for places and reduce the reliance on Torres as their only option up front.

‘And Fernando is ready to fight for his position. He has no problem because he has a lot of confidence and he is enjoying now his football.’

Previous articleRafa and Torres: Living a Nightmare [picture]
Next articleGoing Down Toon? [picture]