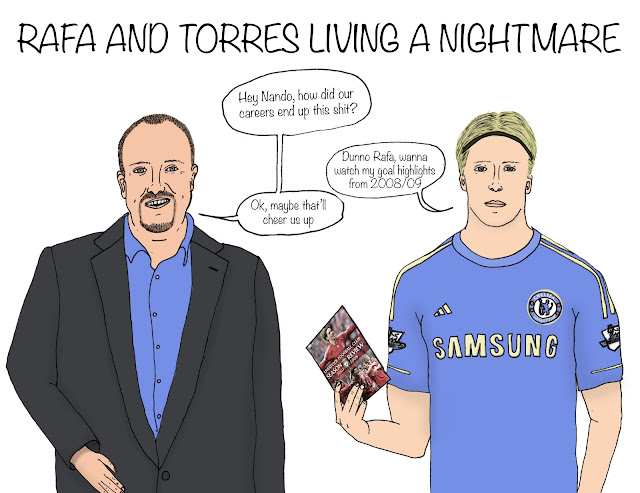 The controversial arrival of Rafa Benitez in place of Roberto Di Matteo at Chelsea has certainly not gone down well with some segments of the fans at Stamford Bridge, with many jeering the poor start he has made to his interim job.

However, the hope that reuniting Fernando Torres with his old Liverpool boss will reignite the goal-scoring flame that was seemingly extinguished by his £50M transfer might make it all worthwhile.

So far though, the Torres of old is nowhere to be seen and Rafa has had to resort to praising the misfiring striker’s defensive contributions and training ground goals in response to critics stating that his Chelsea team-mates are losing all faith in him.

‘Fernando is a great player and his team-mates know he’s a great player,’ said Benitez. ‘He is doing a great job. He scored a lot of goals in training on Monday.’

‘It’s not just scoring goals. We changed his position at corners and if you analyse them, he was amazing. Two or three times he’s cleared the ball and afterwards was doing man-to-man marking – because it’s what he had to do. So he’s helping the team to defend.’

‘As a striker, you like him to score goals, but winning is the main thing. He is an important player for us.’

Rafa will be hoping Torres can find the net in Chelsea’s final Group E Champions League game tonight, which they need to win in order to stand any chance of qualifying for the next stage of the competition.

Having a bet on the footy this weekend? Check out www.freebets.org.uk for the best selection of free sports betting offers available on the net!