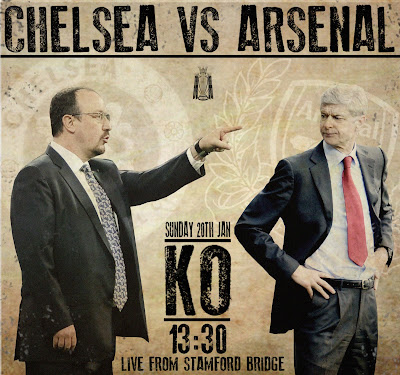 Rafa Benitez will be hoping he can make an improvement to his poor home record with Chelsea this Sunday when Arsenal visit Stamford Bridge after having only won one of this six domestic games in the Premier League since taking over from Roberto Di Matteo in November.

The interim Chelsea boss was on the receiving end of another chorus of of boo’s from the Blues fans midweek when his side allowed Southampton to recover from being 2-0 down to earn a point and Rafa has admitted his side cannot afford to put in another sloppy defensive display when they face the Gunners. Since drawing with Southampton Rafa’s Premier League odds of being the next manager sacked have been cut to 16-1, adding extra pressure on the Spaniard to get a result tomorrow.

‘The team are scoring a lot of goals, as we expect them to, but we have to manage this advantage in a better way,’ said Benitez. ‘We have to be more clinical. We have to defend as a unit, as a team, be more compact and not give them any hope they can score.’

‘It’s always important when you have a draw at home to have a big challenge ahead of you,’ he said. ‘To have Arsenal is a very good thing for me and the players. They are a rival who are close to us. We have to use that as a positive. They are close in the league and if we win there’ll be a big difference.’

Rafa has suggested he may decide to play Demba Ba and Fernando Torres upfront together for the first time. Ba has made an instant impact since his transfer from Newcastle taking just four games to score his first three goals for his new club, in contrast to the the twenty-five games in took for Torres to reach the same tally. Ba is currently the bookies favourite to get the first goal at 7/2 with Torres behind him at 9/2.

‘If you play two strikers, you have to change the shape of the team,’ said Rafa. ‘It depends on the movement of the strikers, the understanding of the game. Ba has played as a winger and a second striker, as has Torres.If Demba Ba is clever enough playing behind Torres, it’s another option. We have these options.’

Previous articleGoing Down Toon? [picture]
Next articleBalotelli Out, David Villa in at Manchester City [picture]