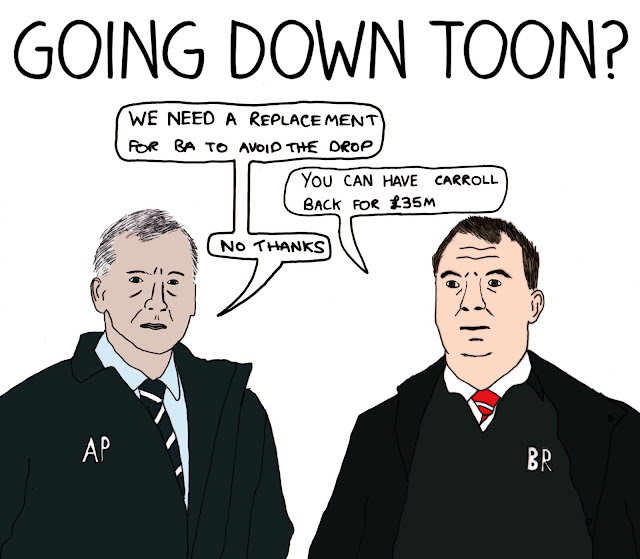 Alan Pardew has admitted that Newcastle need to bring in reinforcements in the January transfer window in order to ensure that they avoid relegation. After 22 games the Magpies hover just two points above the relegation zone and Pardew has called on Mike Ashley to get his wallet out in order to help stop the rot.

Newcastle finished fifth in the Premiership last season, but a lack of investment during the summer and injuries to a number of key players has seen them struggle this time round, with the effects of playing in the Europa League taking its toll on Pardew’s squad. The departure of top scorer Demba Ba means a new striker is high on the Toon manager’s wish list.

‘Mike Ashley has been very supportive,’ stated Pardew. ‘He has to be even more supportive in this window and he has to find the extra money for the striker. We’re not going to buy a striker for the money we’ve received for Demba. We try to get the best possible deal for the club, but we do have to take into account where we are. We are in a battle to secure our Premier League status and make no bones about that.’

‘You have less options in this window,’ Pardew said. ‘But it doesn’t mean to say it’s more difficult. There’s always a player who can enhance a team. We have a couple of strikers on our list who can play out wide, which would push Cabaye forward to play in a loose No 10 role for us, which is a role he’s done very well for us in the past. And we have a couple who would link up well with Papiss through the middle.’

‘It’s not just a striker that’s needed, but that’s going to depend a lot on how much the striker costs us. That’s something I think we’ll come to later in the window. The return to fitness of Steven Taylor and getting Debuchy has helped us massively in defence, but I still think perhaps another one is what we need.’