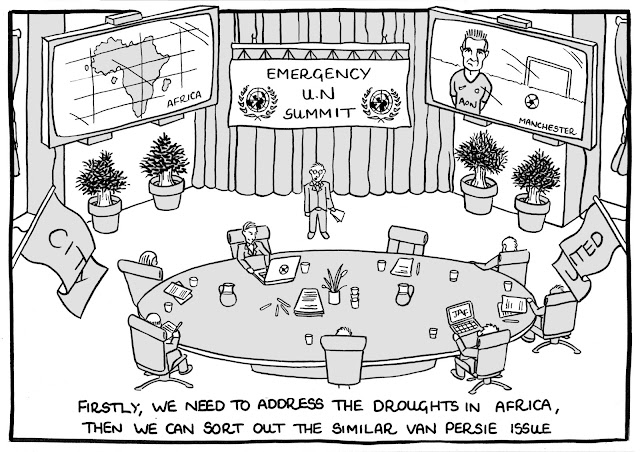 Sir Alex Ferguson has spoken of his confidence that Robin Van Persie’s nine game goal drought will come to an end soon as his side prepare to take on Manchester City this Monday at Old Trafford.

The Dutchman had a prolific scoring start to his first season with United, but is now enduring a dry spell having not scored since February’s win over Everton. Fergie has insisted that Van Persie is not in need of a rest and he has no concerns regarding his recent lack of goals.

‘Robin doesn’t need a rest, that’s for sure,’ Ferguson said. ‘He’s a strong lad with a great physique. It is disappointing that he wasn’t awarded the goal at Sunderland, but I can understand that because it took a wicked deflection.’

‘His shot was fantastic. It was hit with such venom that it’s not surprising it took a deflection, but his ability to manoeuvre his position at that point was excellent. The goals will come. All strikers have little dry spells and you always hope it ends quickly, but it’s just part of being a striker.’

Van Persie’s goal drought is the longest he has suffered since arriving in England in 2004, so Fergie kindly imparted some words of wisdom he received from his father to help his misfiring striker out.

‘You have to get through that period and not lose your faith and belief in yourself. My dad always used to say make sure you batter the ball when you’re in there, don’t tap it or try and side-foot the ball in the net, batter it!’

‘That’s what I always tell strikers when you get in the position make sure you hit it. If the goalkeeper saves it, you can say ‘what a great save.’ But if you try to side-foot it in and the keeper just catches it easily, you’ll get criticised for that.’

Previous articleLuck Runs out for O’Neill in Sunderland job [picture]
Next articleMancini: We’ll Bounce Back Next Season [picture]