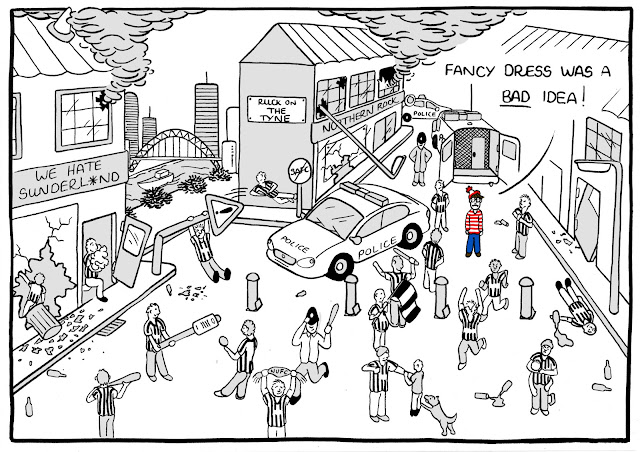 Newcastle have condemned the behaviour of some of their fans after losing 3-0 at home in their derby game against Sunderland on Sunday. Northumbria Police made 29 arrests after fans clashed with the police, with four officers receiving injuries.

A Newcastle spokesman released a statement commenting on the weekends incidents: ‘We were embarrassed and appalled by the behaviour of a minority of so-called fans who last night were involved in disturbances and disorder in Newcastle city centre after the match.

‘Newcastle United have been working with Northumbria Police, and will continue to do so, in order to identify all of the individuals concerned.’

‘The club will take the strongest possible action against those involved in the disturbances and will impose immediate lifetime bans on all those found guilty.’

‘These deplorable individuals have no place at Newcastle United and bring shame on the club and the vast majority of its proper, law-abiding, fans.’

One Newcastle supporter was pictured punching a police horse in the head during the trouble following the game on Sunday. The supporter has been identified as Barry Rogerson, who has been given a lifetime ban from attending Newcastle games.

Rogerson has since apologised for his actions, claiming to be an animal lover despite trying to KO ‘Bud’ the police horse.

‘I reacted stupidly. I did not go out to attack a horse,’ Stated Rogerson. I love animals, I’ve got three dogs, a fish pond out the back and I feed foxes across the road. For some reason people are more upset about the fact that I hit a horse than a policewoman getting hurt.’

‘But I would like to apologise to the horse, to all the mounted section, to people of the North East. I am on medication and had been drinking, but that does not excuse what happened. I had two pints before the match, two bottles of beer at the match and a pint when I left early.

‘I had just come out of the Terrace bar at St James’, turned right and I was right in the middle of it. There was a loud bang and it spooked all the horses. This horse came towards me and I just reacted. The fire cracker went off, and it charged at me. That’s when I panicked and threw a punch.’

‘It made contact with the horse, I tried to get him away from me with my left hand and then punched him with my right. It was sheer panic.’

Luckily Bud was not injured in the attack with a spokesman for West Yorkshire Police confirming that he is: ‘fine and back in his paddock. All our horses are fit and well, resting and relaxed.’

Previous articleMancini: We’ll Bounce Back Next Season [picture]
Next articleWenger and Rodgers set to Miss out on Valdez this Summer [picture]