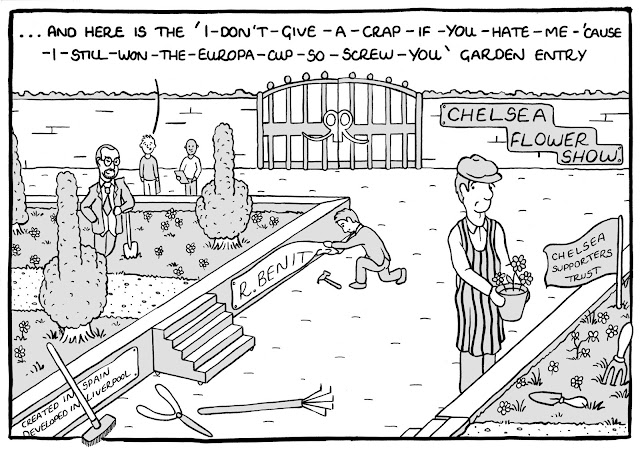 Rafa Benitez can enter his final game as interim manager of Chelsea with his head held high after having secured a top four finish as well as winning the Europa League.

His final challenge is to secure automatic qualification for the Champions League, which will be guaranteed today if his side can beat Everton at Stamford Bridge.

With his C.V nicely bolstered and the respect of some of the Chelsea fans begrudgingly won, Rafa has expressed his desire to manage another English club next season.

Speaking to the press, Benitez said: ‘I don’t see too many top sides in England available at the moment but in football every day things can change.’

‘It’s still my idea to be at a club by next season but there are no official offers so far. A lot of rumours, a lot of agents approaching but that’s it.’

‘A top club or a project. I will not put any a name on it, but a project would interest me. I want to stay around if I can and I want to compete, so we’ll see if we can do it.’

With David Moyes going into his final game with Everton also today, some have suggested that with Benitez’s family living in the Wirrall that the two could be a good fit. However due to his allegiance to the red side of Merseyside, Benitez has ruled out a switch to Everton.

‘I don’t think it will be easy for them to approach me and not easy for me to go there,’ he said. ‘I think I have to be consistent with my ideas. I have a lot of respect for Everton but it would be difficult.’