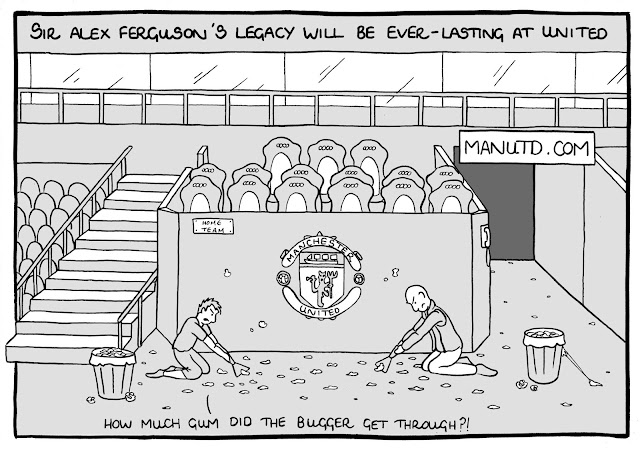 Aged 71 it was inevitable that at some point Alex Ferguson would have to hang up his hairdryer and hand over the reigns of power at Manchester, however this week’s announcement that he will be stepping down at the end of this season sent shock waves across the world of football.

And although the race for the Champions League places and the Premier League relegation battle will have some of the focus this weekend, the main event is surely Sir Alex’s last game managing for the last time at the Theatre of Dreams.

It promises to be an emotional and historic occasion as Fergie’s 26 year tenure at Old Trafford draws to a close and Swansea coach Alan Curtis has stated it will be an honour for his side to participate in the match.

Speaking ahead of Sunday’s game Curtis said: ‘It will be one of those ‘I was there’ sort of moments. It will be an honour for the club to participate in Sir Alex’s last game for Manchester United at Old Trafford.’

‘It’s a game the Swansea players always look forward to anyway to go to Old Trafford. We knew that the Premiership trophy was going to be presented to them but it gives it added spice now.’

‘It’s something that we’re really looking forward to. It really is going to be a momentous occasion to say the least. Probably the game, in many ways, will be a sideshow but it’s important we go there and perform because it will be a massive audience.’

The United players will surely wish to give their long standing gaffer an epic send off and hopefully the game will live up to the occasion. This seasons top scorer Robin Van Persie is favourite to bag the first goal with odds of 5/2 and has odds of 6/1 see Fergie off in style with a hattrick.

Wayne Rooney may miss out on the occasion after having handed in a transfer request at United, with some expecting Ferguson to leave him out of the starting eleven.

A party atmosphere can be expected with United being handed the Premiership trophy after the game and Swansea City defender Angel Rangel has stated that despite the season being effectively over for his team they will be going out to spoil Fergie’s big day.

‘Our season is not over at all. We are trying to get as many points as we can,’ said Rangel. ‘We haven’t matched the 47 points we got last season and it’s important to beat that. Old Trafford is a difficult place to go, but they are on holidays more than us.’

‘United have deserved to win the title, but it doesn’t bother us that they are getting the trophy. We are going there to play a football game and to try and win it. If they are having a party, they can enjoy it. We’ll say well done to them but we want to win.’

Previous articleLuiz Acting No Laughing Matter for Fergie [picture]
Next articleArsenal v Wigan: ‘Do or die’ Situation for Both Sides