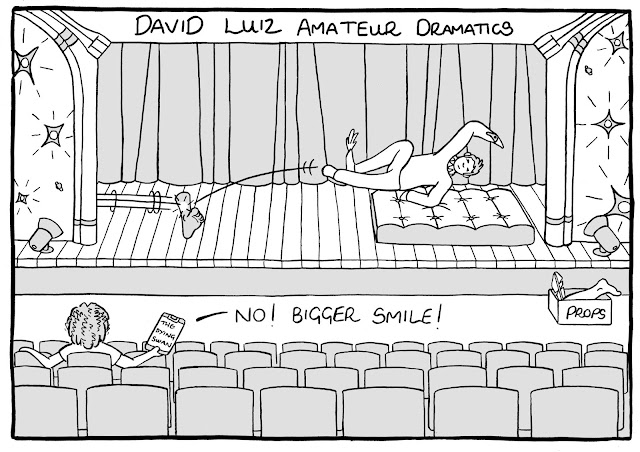 David Luiz has defended himself after being accused by Alex Ferguson of rolling about ‘like a dying swan’ in a deliberate attempt to get Rafael Da Silva sent off in the game at Old Trafford on Sunday.

The Brazilian was seen grinning whilst still on the ground after being fouled by Da Silva and the United manager saw this as play acting to ensure Howard Webb got the red card out.

‘The ref has been bought by the fact Luiz is rolling about,’ said Ferguson. ‘But whether the ref will do anything about it, I doubt very much. When a player retaliates he gets punished the most. Luiz rolled about. You see that with these European, foreign and South American players.’

‘He [Da Silva] retaliates but Luiz quite clearly elbows him twice, then rolls about like a diving swan and that convinces the referee. He was smiling. It’s bad. What kind of professional is that? He [Da Silva] was elbowed and he retaliated. That’s what always happens, the player who retaliates always gets the bigger penalty and it was clear that Luiz elbowed him twice.’

‘It was rash what he [Da Silva] did, he’s a young lad and should know better but retaliation never works. I wouldn’t say it was violent conduct. The referee hasn’t even seen it, I don’t think he could see it at all. But he has gone with the fact that Luiz has rolled about on the floor and I think that convinced him it was a red card.’

Luiz has since stated he was smiling in reaction to a group of United fans who mocked him for his likeness to Simpsons character Sideshow Bob.