Time for a New Scarf for Mancini [picture] 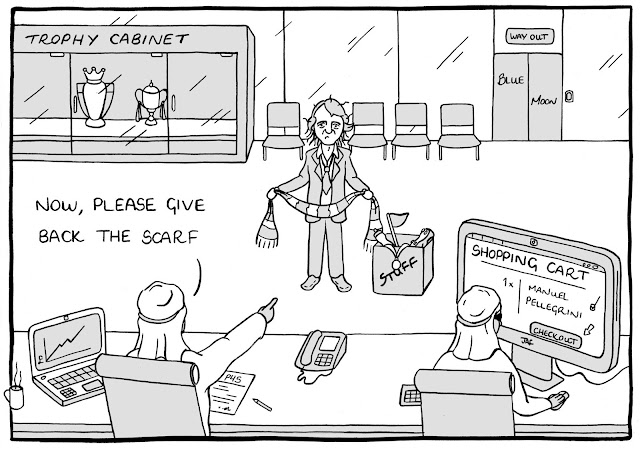 The blue and white scarf that has been permanently attached to the neck of Roberto Mancini for the past three season’s can finally be put to rest after the Italian was sacked as Manchester City manager.

Less than a year ago Mancini signed a new five year deal with the club after winning the City’s first top flight league title in forty-four years, however a trophyless season in which their Premiership crown was reclaimed by Manchester United saw him fall out of favour with the Chairman and Board.

A statement released by City stated: ‘Despite everyone’s best efforts, the Club has failed to achieve any of its stated targets this year, with the exception of qualification for next season’s UEFA Champions League. This, combined with an identified need to develop a holistic approach to all aspects of football at the Club, has meant that the decision has been taken to find a new manager for the 2013/14 season and beyond.’

Many have cited Mancini’s poor relationship with the players he managed as a key factors leading to his dismissal. There were a number of infamous fallouts between Mancini and member’s of his squad including a training ground scrap with Mario Balotelli and a drawn out feud with Carlos Tevez.

Chairman Khaldoon Al Mubarak expressed his gratitude for the success Mancini acheived during his spell as City manager, stating: ‘Roberto’s record speaks for itself and he has the respect and gratitude of Sheikh Mansour, myself and the Board for all of his hard work and commitment over the last three and a half years.

‘He has clearly also secured the love and respect of our fans. He has done as he promised and delivered silverware and success, breaking the Club’s 35-year trophy drought and securing the title in 2012. I would like to personally and publicly thank him for his dedication to the progress that he has overseen and for his support and continued friendship.’

Previous articleArsenal v Wigan: ‘Do or die’ Situation for Both Sides
Next articleBenitez Ready for new Project After Bolstering C.V at Chelsea [picture]