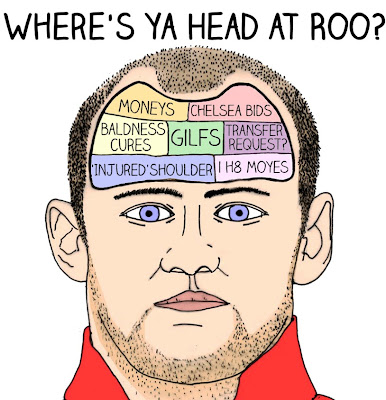 Roy Hodgson has revealed that Wayne Rooney is in sound state of mind ahead of England’s friendly against Scotland tonight, despite the continuing uncertainty over his future playing for Manchester United.

The England forward has been involved in an ongoing transfer saga which has included bids coming in from Chelsea aiming to provide him with a way out from Old Trafford, however United have stood firm maintain that they will not sell for any price.

Speaking ahead of tonight game, Hodgson stated: ‘His mind is fine. He can compartmentalise club and country, which I expect from all players.’

‘I expect players, when they come here, to be fully focused on playing for England.’

‘Players cannot bring their club problems to England. If there were any problems with England, they cannot take them back to their clubs. It is two separate identities.’

Rooney’s England team mate Steven Gerrard has stated that playing some football for his national team is exactly what is needed for him to help take his mind off the ongoing troubles.

Gerrard stated: ‘This game is great for Wayne. There is a lot of media attention on him at the moment because of his club situation but he has got the chance to get some much-needed minutes under his belt and to play for England. That will be a release for him.’

The best thing when there is a pressure on you is to be out on the pitch because it all gets parked up and is a welcome release. I’ve been in the situation where I’ve had issues going on off the pitch.’