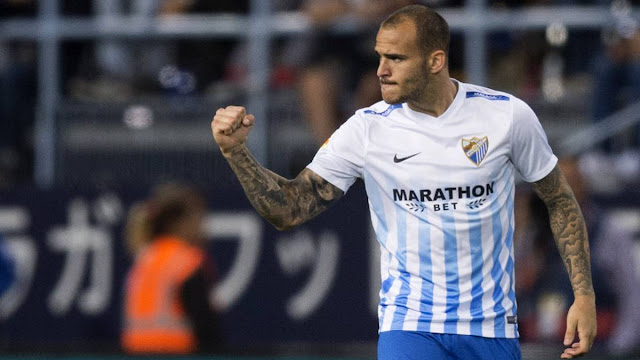 Everton forward Sandro Ramirez isn’t looking forward to a Goodison Park return when his season-long loan at Real Sociedad ends.
The 23-year-old was signed from Malaga in the summer of 2017 when Ronald Koeman was still in charge, but he was loaned out to Sevilla a few months later, as the Dutchman’s successor Sam Allardyce considered him surplus to requirements to his squad.
Sandro didn’t impress the La Liga side enough to secure a permanent deal, neither was manager Marco Silva keen on holding on to him when he arrived in the summer.
The former Barcelona ace is clearly not a wanted man at Everton, and it appears that the feeling is very mutual.
Sandro has seen two injuries slow down his progress at Sociedad, and while an option to sign him on a permanent transfer wasn’t included in his loan deal, the striker has hinted that he would love to stay.

“In principle, it’s just a loan, but in the end, in football, you do not know what can happen. I’ve given everything since the first minute I’ve arrived here and I’ll do it until the end here and show my best version,” Sandro told El Desmarque.
“Let things flow and see how everything evolves. In football you never know what can happen. La Real is a great club, an important club in Spain. If everything goes well, why not? We’ll see what will happen.
“The style of football that suits me is played at Real Sociedad. At Everton, it’s about what I speak and what the team is playing, the style did not suit me. Before coming here I saw Real matches, and I think it’s the football that most resembles me and it suits me.”

From the look of things and considering his comments, the Spaniard is done with Everton, and it’s highly unlikely that he will ever play for the club again.
It’s best both parties part ways as soon as possible.
Previous articlePellegrini’s plans on Carabao Cup clash with Tottenham should excite the fans
Next article‘He’s a beast’ – Pochettino showers praise on star after West Ham’s victory