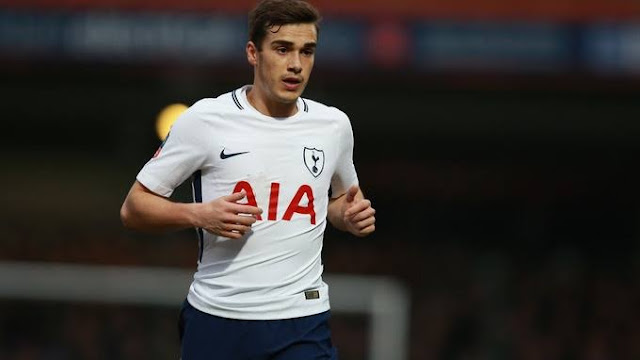 Tottenham Hotspur suffered their third league defeat of 2018-19 at the hands of Manchester City on Monday night.
On Wednesday, they travel to the London Stadium to face West Ham United in the EFL Cup last-16 before returning to league action on Saturday against Wolverhampton Wanderers.
Spurs’ schedule of three games in five days has been branded “ridiculous” by midfield sensation Harry Winks, but he reckons they have enough squad depth and strength to pull through.
Nevertheless, the England international admits that preparing for such a number of games within a few days can be exhausting.

“I think it is more physically hard to prepare, as opposed to tactically and mentally. We are in the same frame of mind and tactics we do all the time,” Winks told The Telegraph.
“Physically it is difficulty. Some of the lads who played today played 90 minutes and are going to have to be ready to play 48 hours later, which is not great and not ideal. It should still be a recovery day.
“Those are the fixtures we have got. We will have to deal with it and luckily enough we have got a squad big enough to be able to deal with this.”

The midweek fixture against the Hammers is the most crucial for Tottenham, as a loss will signify the end of their League Cup campaign, and subsequently, their chances of winning an easy piece of silverware.
The north London side are currently fifth in the table, five points behind joint leaders Manchester City and Liverpool, and they need to get a win at the Molineux Stadium next weekend if they are to keep up pace and challenge for a top-four finish.
Sadly, the physical exhaustion as a result of these three games in five days could deal a huge blow on their fitness level, and manager Mauricio Pochettino will only hope his players come out unscathed.
Previous articleWest Ham star set to miss the matches against Tottenham, Burnley and Huddersfield
Next articleRangers dealt blow as Gerrard confirms influential midfielder is a doubt for Kilmarnock