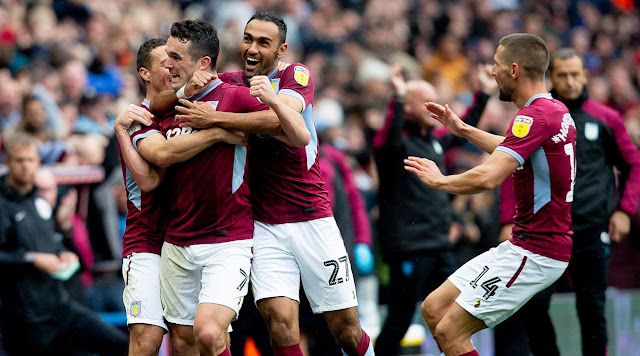 Aston Villa are slowly picking up steam following a woeful start to the 2018-19 English Championship campaign under former boss Steve Bruce.
The Villans managed just three victories in their opening 12 games of the season, leading to the sacking of Bruce and the subsequent appointment of Dean Smith.
Since his arrival, Villa have won three in five games, securing emphatic back-to-back victories heading into the international break.
Smith will hope all his players return unscathed from international duty, but it doesn’t seem that wish will come true from the look of things.
Aston Villa have been dealt a potentially concerning blow, with the BBC reporting that Scotland international midfielder John McGinn has dropped out of Alex McLeish’s squad through a calf injury.
The 24-year-old has established himself as a key member of the Scottish team, winning 13 caps and starting their last four games.
However, he won’t be seeing action in the Uefa Nations League double-header against Albania and Israel.
It remains to be seen how long McGinn will sit out of action, but with just 10 days left before Villa resume their campaign, Smith will be hoping he returns to full fitness as soon as possible.
The dynamic midfielder has scored two goals and registered four assists in 15 league games this term, including one apiece in last Saturday’s 3-0 demolition of Derby.
Villa have a tough run for the remainder of 2018, as they will be coming up against some of the top sides in the table, and they need McGinn fully fit in order to boost their promotion chances.