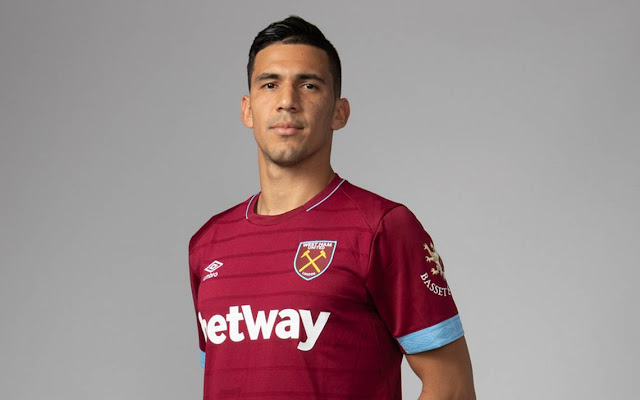 West Ham defender Fabian Balbuena has revealed that he is hoping to follow in the footsteps of fellow South American Carlos Tevez and become a hero in the hearts of many West Ham fans according to a report published by The Irish Mirror.
During the 2006/07 season, Tevez almost single-handedly kept the Hammers in the Premier League when they were on the verge of relegation. This subsequently led to the Argentina developing a reputation as one of the best attackers in the Premier League and he earned a move to Manchester United during that summer.
The Hammers made a poor start to this season as they lost their opening four games of the season. However, they have since recovered well but are still not out of danger.
Balbuena has formed a solid partnership in the heart of defence along with Issa Diop and the stability of this partnership is likely to play an important role in whether the East Londoners manage to play an attractive brand of football for the remainder of the season.
The 27-year-old Balbuena was a teenager when Tevez performed his heroics. He grew up idolizing the Argentina international who won the South American Football of the year award three times between 2003-2005.
Another interesting similarity between Balbuena and Tevez is that they both joined West Ham from Brazilian club Corinthians.
Balbuena said:
“Argentina’ players are of course an example for a lot of South American players. We know the quality of Mascherano and Tevez when they arrived here. They played well here and had a good season and they went on to play in big teams.
“So all of us as players have had a target to play in big teams and grow up as people.
“I remember some games. Especially when West Ham won at Manchester United. Tevez scored a goal. I remember some other goals he scored too.
“He wasn’t a big, big star in South America at the time.
“But when he played at Boca Juniors in Argentina, all the people looked at the good players and knew they could become big stars.
“So when he arrived in England with West Ham. I think the people in South America- believed Tevez could play in a big team”.