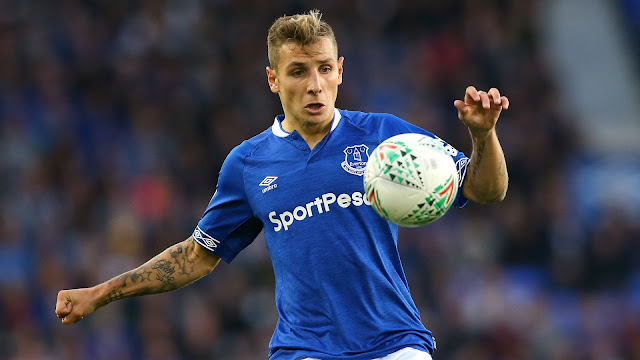 Everton snapped up France international left-back Lucas Digne from Barcelona for £18million during the summer transfer window, and it is safe to say the 25-year-old hit the ground running at Goodison Park.
In 10 English Premier League appearances, the former PSG man has registered one assist, created 20 chances, won 14 tackles, 17 interceptions and completed 81% of his attempted passes, and much more can be expected of him going forward.
Having missed out on France’s World Cup squad, Digne’s Everton performances have earned him a recall, and the Frenchman has now revealed why he swapped Camp Nou for Merseyside.
“I was’t really planning to leave Barca and they were not looking to sell me, but when I spoke to Everton manager Marco Silva on the phone I got this special feeling. He really lit a fire inside of me and I thought: ‘Wow! I really want to play for this club and manager’,” he told Goal.
“Then I went to Barca ask them to please let me go. After a few talks, they accepted, that this was my wish. I am thankful for that, because now I feel happy in Everton.
“Barca was my childhood dream, so yes, it was difficult to leave, because I could have stayed to continue a great life in the club and the city. The club wanted me to stay. But I am 25 years old now and in a phase of my career, where I want to play every week, have a bigger role in the team and feel the full confidence of the coach. So I could not turn down the Everton project.”
Digne has become the first-choice left-back ahead of the more experienced Baines Leighton Baines, and it doesn’t seem he will be giving up that starting berth anytime soon.
Having played alongside some of the best players on the planet, the France international brings huge quality to the table, and landing him for £18million is an absolute steal.
Manager Marco Silva must have done enough to convince him to give up on his childhood dream after just a few years, and his national team recall is proof that he made the right decision.
Everton are hoping to become one of Premier League’s bigwigs going forward, and it led to the appointment of Silva and Marcel Brands as manager and Sporting Director respectively ahead of the season.
Recruiting quality players like Digne will no doubt go a long way in helping the Toffees realize their dreams, and the club can be rest-assured that Silva will continue to help convince more top stars into joining.
Previous articleBad news emerge for Dean Smith as Villa are dealt potentially concerning blow
Next articleFormer West Ham striker makes bold statement on Samir Nasri transfer speculation